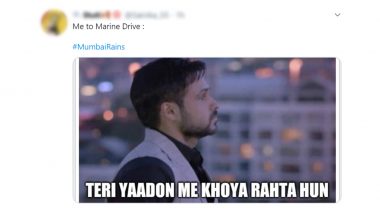 It was raining this morning in Mumbai. The light drizzle has brought some respite from record temperatures. Netizens were quick to share the glimpses of the first spell of pre-monsoon on Twitter. As parts of Mumbai received rainfall, #MumbaiRains have been trending on the social media platform since early morning today, June 1, 2020. Aside from the photos and videos, Mumbai Rains funny memes and jokes are also trending. Some of the reactions hilariously capture how the first spell of pre-monsoon reminded them of Marine Drive, as Mumbaikars were not able to visit the spot because of the lockdown. With the showers of rainfall, let us check out the viral memes and jokes that are keeping the Twitterati enthralled amid the rain. Mumbai Rains: City Wakes Up to Cloudy Skies & Light Rains, IMD Issues Rain Alert as Cyclonic Storm Nisarga Begins to Develop in Arabian Sea.

People in Maharashtra has been experiencing scorching heat over the past few weeks. With the increasing temperature, all Mumbaikars were waiting was for the light drizzle to bring down the temperature, a tad bit, giving comforting weather. The India Meteorological Department (IMD) predicted rain and thundershowers for Mumbai from June 1. With the predictions coming true, netizens could not contain their excitement as rainfall brought them a little respite from the scorching heat. From videos to photos and funny memes, Mumbaikars welcome the first drizzle of pre-monsoon with laughter and joy.

Some Could Also View Rainbow!

Lightning, drizzle followed by a rainbow :) Good start to the month. pic.twitter.com/D064ueoMJT

That Friend in the Group!

Do You Miss Marine Drive?

Who All Missed the First Spell of Pre-Monsoon?

When #MumbaiRains but you're sleeping

The intensity of rainfall is expected to increase in view of the developing cyclonic storm, Nisarg in the Arabian Sea. The Maharashtra Chief Minister, Uddav Thackeray on Sunday requested fishermen to avoid venturing into the sea because of the expected cyclone.

(The above story first appeared on LatestLY on Jun 01, 2020 01:02 PM IST. For more news and updates on politics, world, sports, entertainment and lifestyle, log on to our website latestly.com).