Nia Sharma Presented a Penis Cake for Her 30th Birthday and the NSFW Video of the BIG Bash Is Going Viral! Fans Come up with Funny Reactions 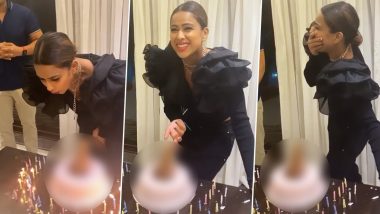 Nia Sharma celebrated her 30th birthday with the kinkiest cake and the NSFW video is now going viral. Usually used for bachelorette parties, Nia Sharma cut a penis cake while celebrating her BIGGG birthday bash in Goa. The x-tra explicit video of Nia Sharma with the penis-shaped video did take her fans by surprise but most of them came up with rather hilarious reactions. While some even failed to spot the phallic cake, some couldn't get enough of her cutesy expressions. The actress who is said to the third sexiest Asian woman, was left with flushed cheeks after she saw the unusual cake. However, she pulled off the embarrassed reaction with her million-dollar smile. You have to check out the viral video to know exactly what we are talking about!

"Omfg the coolest cake ever", read one of the comments. Another fan wondered, "So did she take that in her mouth, I mean that cake". "Is no one gonna talk about whats on cake", wrote yet another fan. "I just noticed the cake oh god! But I'm so glad you enjoyed happy birthday once again" commented a happy fan.

Well, we cannot get enough of this video that is now going viral on different social media platforms. Apart from this one, Nia Sharma reportedly had 18 birthday cakes to cut on her big day. The actress who was last seen in Naagin 4 recently also won Khatron Ke Khiladi: Made in India show. We at LatestLY wish the diva a very happy birthday!

(The above story first appeared on LatestLY on Sep 18, 2020 12:08 PM IST. For more news and updates on politics, world, sports, entertainment and lifestyle, log on to our website latestly.com).