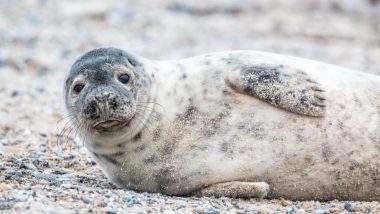 Tourists have been asked to stop taking selfies with seals at Yorkshire coast. The Marine Conservation Society (MCS), a UK-based charity said that uncontrolled dogs, drones and coastal explorers have caused distress to seals leading to rescue them. They are mostly disturbed by people coming to take photos with them. The charity has asked people to give the animals space after receiving a "concerning" number of calls relating to wildlife being affecting by the increase in visitors. Some weeks ago, seal pups were rescued from Filey and Bridlington after their mothers left them to save themselves. Chilling Moment of Wild Black Bear Posing for Selfie With Girl at Mexico’s Chipinque Ecological Park Goes Viral, Netizens Shocked.

Matt Barnes, a volunteer from MCS was quoted as saying, "Seals are very vulnerable to disturbance, which upsets their routine of feeding and digestion, increases their use of energy, raises their stress levels and means they are more likely to injure themselves." While they may look timid, they are wild and strong animals. He added, "This has manifested in people seeking 'seal selfies', having uncontrolled dogs off the leads, drones, watercraft and coastal explorers disturbing vital haul-out sites." Angry Elephant Trashes Man's Bicycle While He Manages to Escape From Being Attacked, Viral Video Gets Mixed Reactions As Netizens Think it Was Trying to Help!

After the lockdown was lifted, more and more people have started visiting the beaches. MCS has urged people to keep the noise minimum. They also said that such taking photos with the mother seals are dangerous because frightened seals may just abandon their pups. Especially during this time of seal pupping season when the young pups and their mothers need space. Common and grey seal colonies live in the region. Nearly all seal species are reliant on marine habitats, though some enter rivers in search of food which is typically fish.

(The above story first appeared on LatestLY on Sep 19, 2020 09:11 PM IST. For more news and updates on politics, world, sports, entertainment and lifestyle, log on to our website latestly.com).