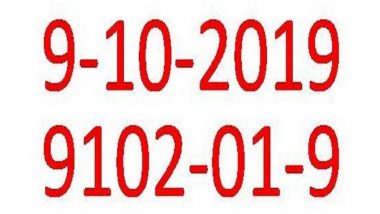 New Delhi, October 9: Today's date 9.10.2019 is quite rare- it is a palindrome, which means it reads the same way backward and forward. Merriam Webster defines palindrome as a word, verse, sentence or a number that reads the same both ways backwards or forwards.

Some notable examples are, Nitin (word), Madam I'm Adam (a sentence) or 1881 (a number). If we go by one of India's most predominantly used date notation, the d-mm-yy format, we get 9-10-2019 (9102019). We can also discover different palindrome days on different occasions using different date formats.