Robert Downey Jr’s Iron Man and Josh Brolin’s Thanos Get Hyper-Realistic Portraits That You Can Zoom Right Down to the Pores! (View Pics) 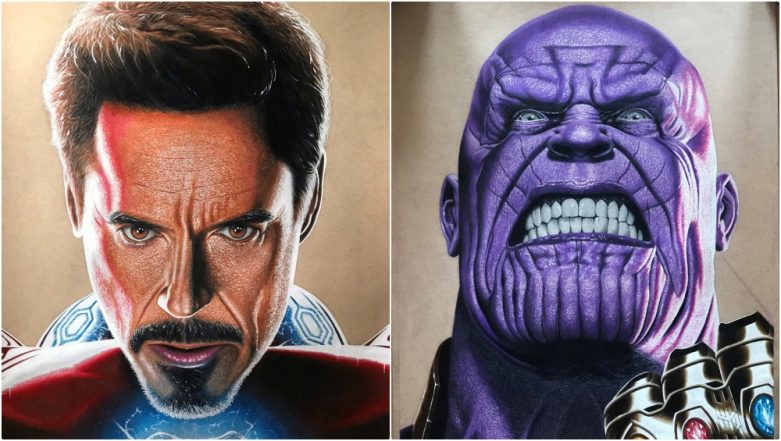 Robert Downey Jr. and his Marvel superhero avatar of Iron Man boasts of millions of fans worldwide. His on-screen nemesis, Thanos played by Josh Brolin are also not far behind in terms of popularity. And with few days to go for much-hyped Iron Man vs Thanos (technically, Avengers vs the Mad Titan, but Iron Man has a lot more personal scores to settle) in Avengers: Endgame, the excitement among fans is palpable. One such fan, a self-taught artist named Gurekbal Singh Bhachu draws hyper-realistic portraits of the duo that you can zoom right down to the pores. Robert Downey Jr: 5 Reasons Why It Is Impossible to Recast the Iron Man of Our Generation Any Time Soon!

In a thread, Gurekbal explained how he began working on the Iron Man portrait at the start of this year. He says, “I’ve literally been working on this since the beginning of the year so having your support through the progress of this piece has been extremely appreciated. Thank you all so much for the kind words and support!” Yes, this piece of beauty took about four months to complete, and the end result is all worth it. Avengers Endgame Star Robert Downey Jr Has a Very Adorable Way to Wish Happy Easter - View Pic.

It’s been a really long time working on this drawing and it’d be an understatement to say this piece has tested me the most but finally I’m proud to say that my drawing of Iron Man/ @robertdowneyjr is complete. With literally 3 months and 19 days put into this drawing and Avengers Endgame right around the corner, the timing couldn’t be more appropriate. I really don’t have much else to say except thank you for being patient and staying with me throughout the process, I usually don’t plan for these drawings to take as long as they do but quality is always a priority for me and so it’s the trade-off I have to make to ensure that these pieces are worth looking back on. Once again, the support is forever appreciated, thank you so much! ❤️ #art #arts_gate #art_supernova #artistic_unity_ #artist #pencil #illustration #drawing #sketch #tonystark #spotlightonartists #wip #worldofpencils2017 #instaart #avengers #drawinganatomyandart #artistic_dome #young_artists_help #art_worldly #art_spotlight #draw #duende_arts_help #artfido #art_realism_ #avengersendgame #gsinghb #marvel #ironman #gurekbal

To all the budding artists and art enthusiasts out there, the 24-year-old artist mentioned the tools used to make this fantastically detailed drawing. He writes, “As always, here is the list of tools I used for this piece: Paper: Strathmore Toned Tan, Pencils: Prismacolor Premier and Highlights: Uni Posca Paint Pen.”

Check Out The Sketch of Thanos' Sketch

Dread it. Run from it. Destiny still arrives. Thank you all for being patient with this drawing. I spent much longer on this than any of my previous pieces. I’m still quite unsure if I’m going to include a background as I made some mistakes and they’re quite visible so I kind of want to cover that up. It’s been exhausting but I don’t want that to stop me from going all the way and so over the coming days I’ll make that decision and keep you updated, far more than these past 2-3 weeks of absence lol. Thank you for supporting me and my work, much love as always ❤️ Pencils: Prismacolor Premier (@prismacolor) Paper: Strathmore Toned Tan (@strathmoreart) Highlights: White Uni Posca Paint Pen (@poscagallery) #art #arts_gate #art_supernova #artistic_unity_ #artist #pencil #illustration #drawing #sketch #artistic_nation #spotlightonartists #wip #worldofpencils2017 #instaart #artofdrawingg #drawinganatomyandart #artistic_dome #young_artists_help #art_worldly #art_spotlight #draw #duende_arts_help #artfido #art_realism_ #artistuniversity #gsinghb #sharingart #illustratenow #gurekbal

Earlier in August 2018, he had painted the portrait of Thanos, the purple space alien and supervillain of Marvel Cinematic Universe (MCU). Gurekbal took about two and a half months for this drawing of Thanos in evil mode. While Thanos’ portrait is amazing, it is Robert Downey Jr’s sketch that blows our mind away. No wonder the netizens are going gaga over this particular work.

Here’s my completed drawing of Iron Man that I’ve been working on for almost 4 months. pic.twitter.com/zSYxzhere1

Y U SO TALENTED?

You drew this in HD https://t.co/0qcrgHqCaQ

Hey @RobertDowneyJr, how can I get this drawing to you? 🙂 https://t.co/RzbclmZeh5

Among other celebrity drawings, Gurekbal has made sketches of Samuel L Jackson aka Marvel's Nick Fury, Rihanna, Drake, Morgan Freeman, Muhammad Ali, Bruce Lee, and more. We hope this talented artist somehow gets in touch with Robert Downey Jr. because this is an incredible sketch even RDJ will fall in love with. Especially, with speculations rife over Robert making his final appearance as Iron Man in Marvel films with Avengers: Endgame, fans are getting more emotional about the Hollywood heartthrob.