Solar Eclipse 2021: What Is an Annular Solar Eclipse? Here's Everything You Need To Know About The Science Behind The 'Ring of Fire' and Will Surya Grahan Be Visible In India

An annular solar eclipse is set to occur this Thursday and has the stargazers quite excited about the prospect of witnessing yet another celestial event this year. Here's all you need to know about this rare cosmic phenomenon. 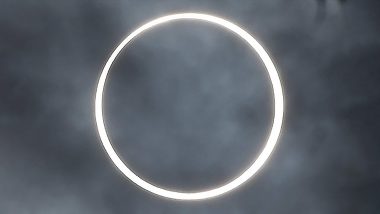 An annular solar eclipse is set to occur this Thursday and has the stargazers quite excited about the prospect of witnessing yet another celestial event this year (Blood moon first made a celestial debut earlier in May 26th). This rare cosmic event will not be visible to everyone on the globe. However, it will be visible in parts of India and others would just have to watch it online.  The rest of the country could observe a partial eclipse. Most parts of the world will be able to view a partial solar eclipse from their respective countries, however, only a select few countries will able to witness an Annuar Solar eclipse.

So what Is an Annular Solar Eclipse?

There are three types of solar eclipses – total, partial and annular. Annular is a cosmic phenomenon that occurs when the moon moves between the Sun and the Earth. In an annular solar eclipse, the Moon covers the centre of the Sun. This leaves the merely outer rim of the Sun perceptible to the human eyes (also known as the Ring of Fire)  - which, just an FYI, shouldn't be viewed without proper protection gear shielding your eyes. Don't pull a Donald Trump, Folks.

(The above story first appeared on LatestLY on Jun 09, 2021 01:08 PM IST. For more news and updates on politics, world, sports, entertainment and lifestyle, log on to our website latestly.com).