The brown dog is creeping out the internet as netizens are unable to decide which celebrity does the dog looks like. The humanlike features of this cute little dog have a whole bunch of celebrity doppelgangers. 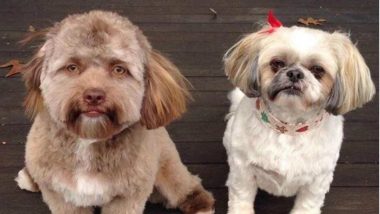 Not all of us have been lucky enough to meet our doppelganger. But over the time, internet has given us some exciting moments where we come across our favourite celebrity lookalikes. And some stars have also found their doubles in the animal kingdom. The similarities are striking! The internet goes gaga over such resemblances. Of course, the adorable lookalikes might be a bit too fury to step in the shoes of our very own celebs. But hey, it’s fun! After a hectic day, who will not like trolling the uncanny duplicates. Much like a recent picture of a dog that is making rounds on the social media. The brown dog is creeping out the internet as netizens are unable to decide which celebrity does the dog looks like.

The picture was first posted to Reddit (an American social news aggregation) by emcegrath. “A friend of a friend posted a pic on Facebook of her dog. It looks like it has a man’s face,” reads the post. And in no time, it caught the netizens attention. The humanlike features of this cute little dog have a whole bunch of celebrity doppelgangers. Its bears are weird resemblance to a few well-known actors. Some are comparing it with a popular American actor Jake Gyllenhaal while others think that it looks like Spider-Man Tobey Maguire. Check how Twitterati is going crazy over this dog which the internet is claiming to have a human face.

Did you notice that?

THIS DOG HAS A HUMAN FACE pic.twitter.com/nEmQ6ZgJcZ

This totally creeps me out https://t.co/wIpICQ32kd

What do you think?

I think it looks like someone else closer than Jake Gyllenhaal, but I can't figure it out pic.twitter.com/bSv34JcWwy

Holy shit I thought that was a face swap.

Well I see, no difference!

The dog is undoubtedly pretty with its unique features. And honestly, even we are striving to find out who does this cute little fur could resemble.

Which celebrity do you think this dog looks like?

(The above story first appeared on LatestLY on Mar 13, 2018 11:53 AM IST. For more news and updates on politics, world, sports, entertainment and lifestyle, log on to our website latestly.com).