TikTok Video of Three Men Playing Cards in Middle of Florida Traffic Goes Viral And Internet Wants to Know Who Won the Game! 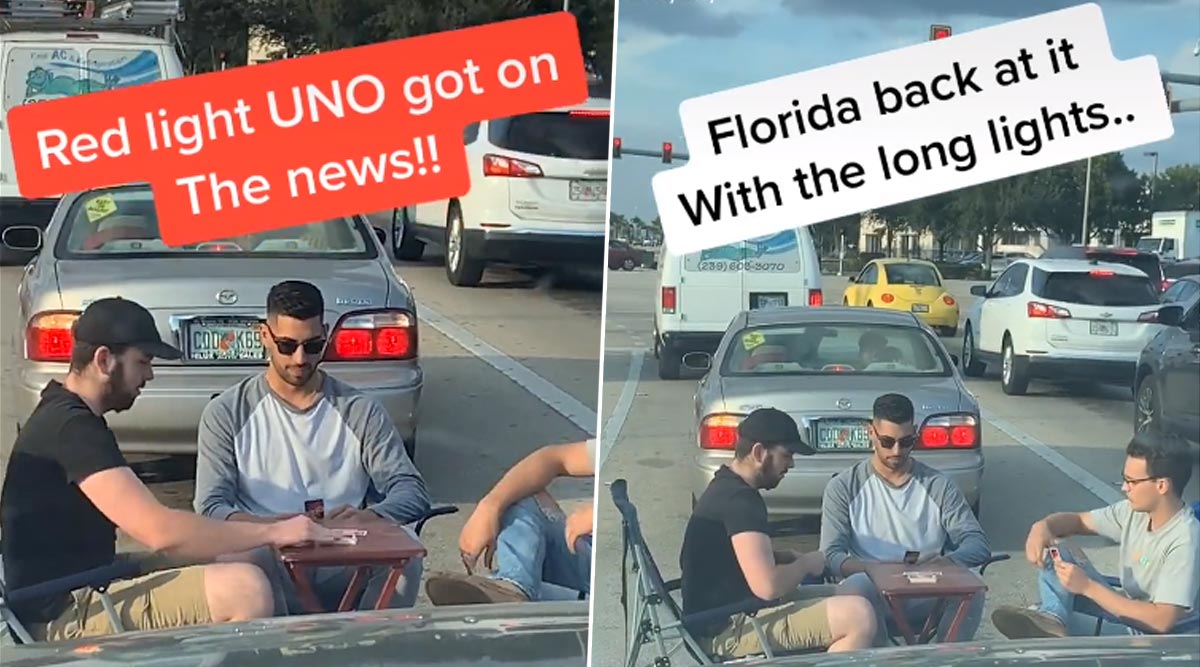 A video of three men playing cards in the middle of traffic on a Florida street has gone viral on social media platforms. The clip shows them sitting on chairs playing cards with a foldable table in between them. The TikTok video has gone viral on the internet with people coming up with various hilarious explanations about it. It was posted on TikTok with the caption, "Florida back at it with the long lights." It has gone viral with over a million likes and thousands of comments on it. Meanwhile, social media users took the opportunity to have a good laugh. Some commented asking who won the game and if they generally play cards on busy streets. Tripura Father-Daughter Duo Singing ‘The Lion Sleeps Tonight’ Is Perfect to Begin Your Weekend, Viral Video Delights the Internet.

In the video, a young boy is seen watching the men play cards sitting in the backseat of his car. It is not known where in Flordia city the video was captured. As the video went viral, people came up with varying explanations about it. Many TikTok users poked fun at the infamous long traffics of Florida. One comment reads, "The lights take 3 business days to go green for 5 seconds." A TikTok user joked saying, "I love living in Florida. So nice to make new friends at the red light!" Another writes, "This is the most Florida thing I’ve ever seen."

Some wondered if it was the Jonas brothers trio (well, they clearly aren't). As the region is not known, some guessed it to be Southwest Florida, others said it was John Young Parkway in Orlando or other Florida cities like Jacksonville. People also suggested that it looked like Flamingo Road in Pembroke Pines or maybe Southeast Indian Street in Stuart.