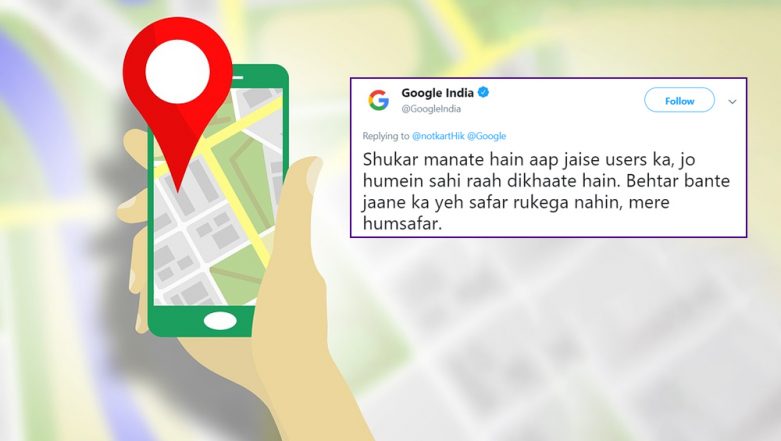 We all use Google Maps to get to our destinations and it is one application most of us are thankful for. From giving the traffic details to the best routes, Maps are really a convenient option. Google too, introduces new features every once in a while but it is a common confusion when you are approaching a flyover, whether you have to take it or not. And more often you end up taking the wrong route and have to go ahead, take a turn and come back to get on the flyover. A Twitter user pointed out the same and the tweet went instantly viral, so much so that Google took notice and gave him a reply. New Google Maps Update Will Indicate Phone Battery Life to the Recipient Along With Location Sharing.

A Twitter user by the name Karthik Arora wrote a tweet addressing Google that the deflection while approaching a flyover is not visible. It was a sarcastically written tweet which was retweeted over 8,000 times. In fact, several other users copied the same tweet and posted on their profiles. It was hard for Google then to miss out on addressing the concern of their consumer. Google's reply was also innovative as they used a shayari to reply to him. Twitter users are loving this friendly banter. Google Maps Showed Mandir Yehi Banega Near Ram Janmabhoomi Site at Ayodhya, View Pic.

Within 2 days, the tweet got over 20,000 plus likes and 8,500 people retweeted it. Google India's reply is also winning hearts as they promise to get the feature soon.

Check Google India's Reply to the Tweet With a Shayari

Haha, isn't it cool? How Google has not just acknowledged the issue but also said they would work on it. So hopefully, we all should get the feature we have been eagerly waiting for on Google Maps. Wish we all get a u-turn free journey!