Viswasam Tops The List of Most Tweeted Hashtags of First Half of 2019 in India; From #LokSabhaElections2019 to #CWC19 Know The Top Five Trends

Today Twitterverse is celebrating #Viswasam taking over the internet, all thanks to #ThalaAjith fans. The movie hashtag is leading the #Top5TwitterTags making it into the list of the most popular trends on Twitter for the first six months of Twitter. 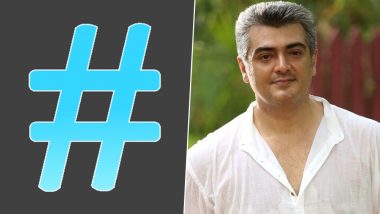 Twitter is probably one of the most exciting social media platforms that keep you updated with the most current trends. Especially in India, that has a population to enable hashtags to trend like crazy, Twitter is almost like a religion. Today Twitterverse is celebrating #Viswasam taking over the internet, all thanks to #ThalaAjith fans. The movie hashtag is leading the #Top5TwitterTags making it into the list of the most popular trends on Twitter for the first six months of Twitter. The Tamil-language action drama film written and directed by Siva is making people go gaga on the internet and HOW! However, you might want to check out the other popular hashtags on Twitter.

Top Five Trends on Twitter In The First Half of 2019:

#Viswasam: The Tamil film with Ajith Kumar and Nayanthara in the lead cast is said to be leading the most popular hashtag list in India in the first half of 2019. There is an umpteen number of tweets under the hashtag. The South-Indian film fans have trended many hashtags in the past, so there are no surprises why #Vishwasam trended. Viswasam Becomes No 1 Twitter Trend In The First Half Of 2019! Fans ReJoice Thala Ajith's This Feat.

#Thala #Ajith becomes the 1st Tamil Movie Star to achieve a cumulative gross of ₹ 200 Crs in a single calendar year in TN.. #Viswasam and #NerkondaPaarvai in 2019.. #ThalaAjith1stStar200CrsinTN pic.twitter.com/MjJu9NCXHz

#CWC19: Cricket is what India lives for. No wonder #CWC19 took over Twitter. Although team India couldn't make it beyond the semi-finals in the ICC Cricket World Cup 2019, the #CWC10 did rock Twitter.

New Zealand loses its first wicket on the first ball...

#Maharshi: Telugu-language action drama film directed by Vamsi Paidipally with Mahesh Babu in the lead scored the fourth position on the top hashtag list for the first six months of 2019.

While most ppl equate Indian movie industry with #Bollywood , two tags which made into #Top5TwitterTags in the 1st half of 2019 are from South movie industry..#Viswasam and #Maharshi at No.1 and No.4 respectively.. https://t.co/US2aiZ30rU

#NewProfilePic: This hashtag is used whenever anyone uploads a new profile pic (duh!). With so many people updating their DPs every now and then, #NewProfilePic had to make it to the list.

It is worth noticing that two of the hashtags in the top five twitter tags are prime South-Indian movies. We have to admit it that the south is really crazy about their movies and would do anything to trend them on Twitter.

(The above story first appeared on LatestLY on Aug 23, 2019 02:39 PM IST. For more news and updates on politics, world, sports, entertainment and lifestyle, log on to our website latestly.com).