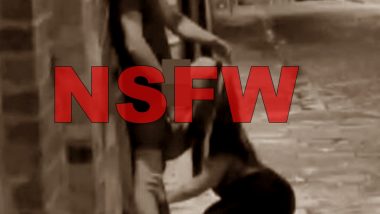 Everything You Need To Know:

A couple suspected of having sex in front of hundreds of onlookers in a busy part of Liverpool have been named by police.https://t.co/kVLMTjtcwY

Joe Firby was arrested on August 8, in the Gateshead area by Northumbria Police and is to appear in Liverpool Magistrates’ Court.  Joanne Anderson said: "I am extremely shocked and concerned at videos circulating showing acts of indecent exposure and sexual activity in our city.  Let me be clear – this is a criminal offence. Acts of indecent behaviour in public places in Liverpool is simply unacceptable and will not be tolerated. I have spoken with Merseyside Police and requested immediate and appropriate action."

(The above story first appeared on LatestLY on Aug 11, 2022 10:58 AM IST. For more news and updates on politics, world, sports, entertainment and lifestyle, log on to our website latestly.com).