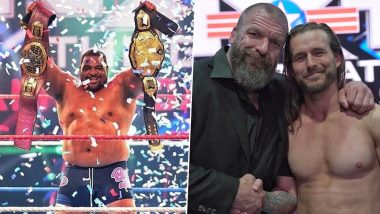 Adam Cole's reign as WWE NXT Champion for 403 days finally came to an end as Keith Lee defeated him at WWE NXT Great American Bash 2020. It was a 'Champion vs Champion' match which had a stipulation of winners takes it all. Keith Lee who already held NXT North American title now has bagged NXT Championship belt. The 'Bask in the Glory' now holds two titles in the black and gold brand of WWE after defeating the leader of The Undisputed Era. Triple H went on to appreciate Adam Cole's effort after his defeat. WWE Raw Results and Highlights, July 6, 2020: Kevin Owens, Rey Mysterio Defeat Seth Rollins, Buddy Murphy in Tag Team Match, Asuka Emerges Victorious Over Bayley in 'Champion vs Champion' Contest (View Pics)

Triple H mentioned in his tweet that, 'It’s the talent that makes the title.

During his 403 day reign over the black and gold brand, Adam Cole MADE the NXT championship, THE championship'. The Game also congratulated Keith Lee for becoming NXT Champion as he shared a picture with him on his Instagram account. One thing is clear that the future of Adam Cole in WWE is bright and we might see him soon in the main rosters of WWE where he can work with A-listers like Seth Rollins, AJ Styles, Randy Orton and others.

There is a saying “it’s the talent that makes the title.”

During his 403 day reign over the black and gold brand Adam Cole MADE the NXT championship, THE championship. That reign might be over but he’s just getting started.

Where does @WWENXT goes from here? The possibilities are #Limitless. Congratulations @realkeithlee!!! #NXTGAB

Now that Keith Lee is a new NXT Champion, we can see him get into a rivalry with Johnny Gargano or Tommaso Ciampa. Speaking about Adam Cole, he can still continue to be in a feud with Karrion Kross and move to WWE roster soon.

(The above story first appeared on LatestLY on Jul 09, 2020 04:12 PM IST. For more news and updates on politics, world, sports, entertainment and lifestyle, log on to our website latestly.com).