India added seven medals on Day 8 of Jakarta Palembang 2018 Asian Games. Dutee Chand in Women's 100m, Hima Das in Women's 400m and Muhammed Anas Yahiya in Men's 400m won silver medals in athletics. There was a heartbreaking moment for India when armyman Govindan Lakshmanan was denied a bronze medal in men's 10,000m after getting disqualified for stepping out of track during finals. India also claimed two medals in the equestrian event of the 18th Asian Games with Fouaad Mirza securing the silver in individual jumping event, which meant India won an Asiad medal in the event after 36 years. India also clinched two bridge medals thanks to men's and mixed team making to the semi-finals. Apart from the medals won on the eight day, we also saw ace badminton stars ace Saina Nehwal and P.V. Sindhu progressing to the semi-finals of women's singles and assure two historic medals of the Asian Games. This is the first time Indian women singles shuttlers are assured of a medal in Asian Games. And India will have the first singles medals in badminton after the 1982 Asiad when Syed Modi won the bronze.In archery, India's men's and women's compound archery teams overcame Taiwan teams in the semi-finals on Sunday to set up title clashes against South Korean teams at the 18th Asian Games. In Hockey, India men's team beat South Korea 5-3 to sit comfortably on top of pool A. All they need is a draw against Sri Lanka to advance to semis as the top side from their pool. So, that was all from Day 8 of Asian Games. Do join us for all the live action of the ninth day right here at LatestLY.

Not an ideal way to end the day as Indian table tennis men's team lost to Chinese Taipei 3-2 in group game. 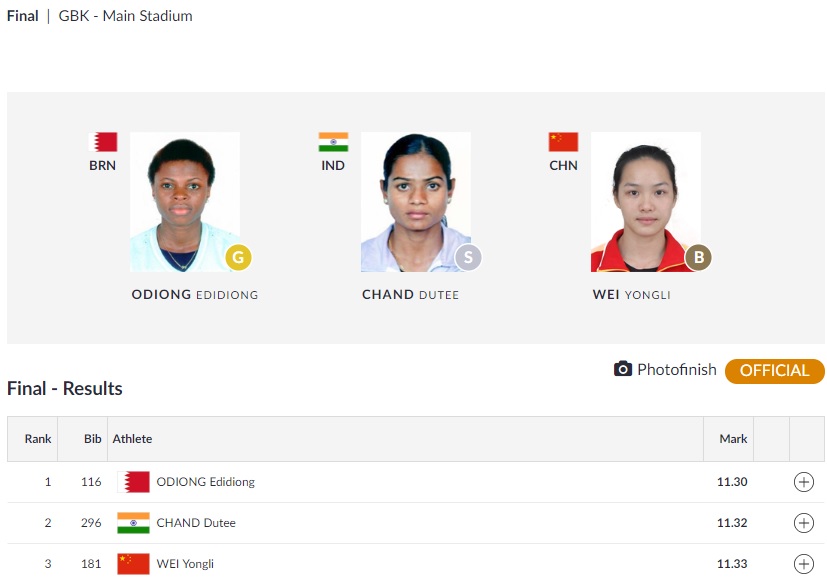 India's Dutee Chand wins silver medal in Women's 100m on Sunday. She clocked a time of 11.32 seconds to finish behind Edidiong Odiong of Bahrain who completed the race in 11.30 seconds to bag the gold medal. 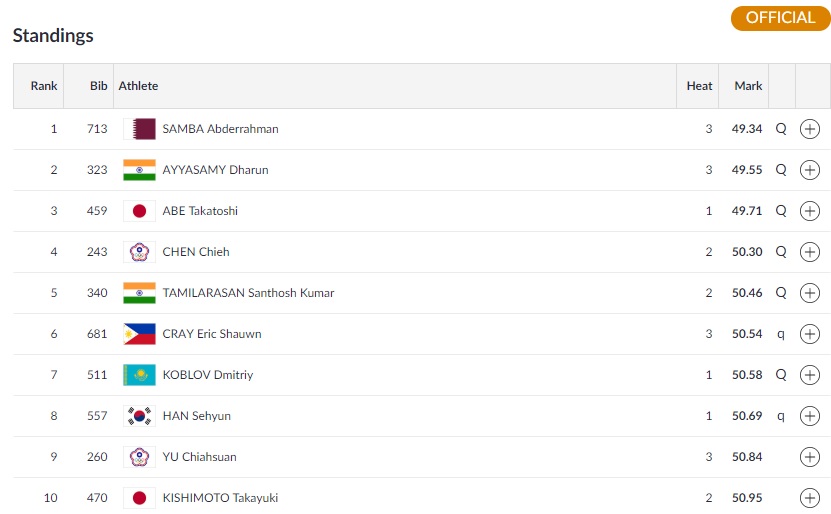 (Photo Credits: Asian Games 2018 Official Website)
Lakshmanan Govindan Stripped Off Bronze Medal in 10,000m Event
26 Aug, 19:18
A complete shocker for India's Lakshmanan Govindan as he is stripped of his bronze medal won in men's 10,000m at Asian Games 2018. The 28-year-old had stepped out of the track on one of the laps during the 10,000m men's finals. This is a real heart-breaking moment for the long-distance runner and entire country. India's medal tally slips to 35.

Correction: #LakshmananGovindan stands disqualified in the Men's 10,000m event as it has been confirmed that Lakshmanan had stepped outside the white line. #TeamIndia misses out on a historic win at the #AsianGames2018! #GreatEffort Lakshmanan pic.twitter.com/NEX4XJBptp— Team India (@ioaindia) August 26, 2018 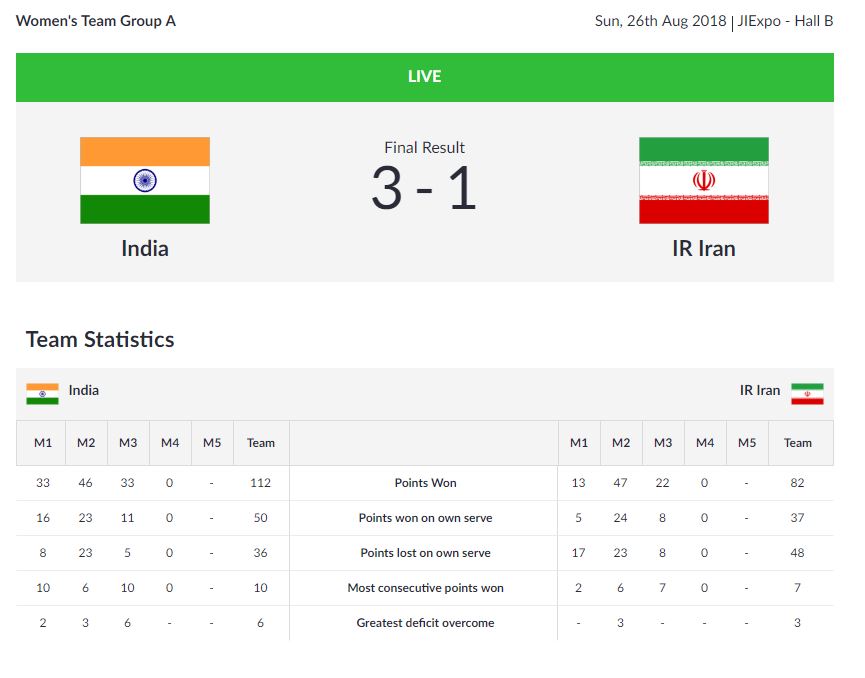 The eighth day of Jakarta Palembang 2018 Asian Games will be held on August 26, and it has a perfect recipe to become a blockbuster Sunday. The Indian athletes began their campaign on Saturday and already bagged their first medal in athletics after Tajinderpal Singh Toor won a gold medal in men’s shot-put event. Not just that, the biggies such as Hima Das, Dutee Chand, Muhammed Anas Yahiya and Rajiv Arokia among many in action at finals of various track and field categories. Catch the live news updates of all the action (match timings in IST) of the Asian Games 2018 in Indonesia from qualification, medal events, reports to updated medal table, tally and country-wise standings, here at Latestly. This is done in addition to the live telecast, and online streaming of Asian Games 2018 is carried on by Sony Sports Network and Sony Liv. Asian Games Medal Tally 2018 Updated: Tajinderpal Singh Wins Gold, India's Medal Tally Rises to 29 in Current Table and Country-Wise Medal Standings.

When 572-member strong Indian contingent landed in Jakarta and Palembang, Indonesia to participate in 36 sports, there were few strong contenders to bag medals, and there were few sports and disciplines were victories seemed guaranteed. In eight days of sporting action since August 19, we have seen predictions fail, favourites lose and little-known script history for India. Amidst the hits and misses, the nation is trying its best to outshine country’s results in the previous edition, Incheon 2014 Asian Games – a total of 57 medals including 11 gold, nine silver and 37 bronze. India’s medal count at 2018 Asian Games so far stands at 29 with seven gold, five silver and 17 bronze. There’s a gap of 28 medals at the start of Day 8 of Asian Games 2018, a day that has potential to reduce the difference to some extent. Asian Games 2018 Day 8 India Schedule in IST & Medal Tally: Full Fixtures List of Indian Athletes in Action on August 26.

The biggest bet is Athletics with individuals displaying top form in the qualification stage. Hima Das and Nirmala in Women's 400m Final; Muhammed Anas Yahiya and Rajiv Arokia in Men's 400m Final; Lakshmanan Govindan in Men's 10,000m Final and Sreeshankar in Men's Long Jump Final. Apart from the gold medal events, there are others who will be in action for a place in finals. After Athletics, it is Badminton who will draw everyone’s attention from India. Biggest names in badminton world, PV Sindhu and Saina Nehwal will be playing respective quarter-final matches for a place in semis. These are the last hope for Indian shuttlers to bag an Asiad medal in badminton this edition after men’s and women’s doubles team tanked miserably.

Apart from Athletics and Badminton, Bridge is one event that has emerged as a medal-winning discipline for India. India's mixed team and men’s bridge teams qualified for the semi-finals, assuring the country at least two bronze medals. Men’s team semis will take place features teams from China, Singapore and Hong Kong, China along with India. In the mixed team, India will be competing with Indonesia, China and Thailand. There’s a lot more in store on Day 8, so stay glued to this space to be updated of all news from Asian Games 2018.