India's badminton queens Saina Nehwal and PV Sindhu will reignite their on-field rivalry at home turf for the coveted women's singles title at the 83rd edition of the Senior National Badminton Championships which begins with the qualifiers here Tuesday. 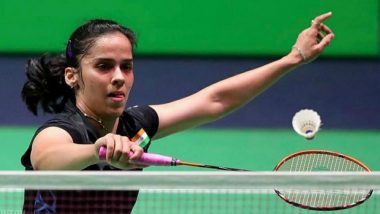 Guwahati, Feb 11: India's badminton queens Saina Nehwal and PV Sindhu will reignite their on-field rivalry at home turf for the coveted women's singles title at the 83rd edition of the Senior National Badminton Championships which begins with the qualifiers here Tuesday. Sindhu and Saina will undoubtedly be the biggest attraction with some big names including last edition's finalists, Kidambi Srikanth and HS Prannoy giving the tournament a miss due to fitness issues. P V Sindhu Signs Approx 50 Crore Deal with Chinese Sports Brand Li Ning.

The duo, finalists at the last edition, have been India's biggest achievers over the years, including last season. While Sindhu capped off the season with a maiden gold at the World Tour Final in December after reaching six finals, including the major events such as Commonwealth Games, Asian Games and World Championship, Saina too have entered four finals, with one resulting in a gold at the Commonwealth Games.

Saina had the last laugh in the last edition of the tournament against Sindhu and she went on to get the better off her compatriot at Gold Coast final as well for her second CWG gold. Another summit clash is likely on the cards for the celebrated shuttlers and they would look to out do each other ahead of the All England championship early next month.

Defending champion Saina, who made a good start to the new BWF season with a title triumph at the Indonesia Masters, will look to conquer the Nationals for the fourth time, while Sindhu too would hope to lift the trophy for the third time. According to the tournament rules, the top 8 players, ranked below 50 in the BWF World Rankings as on January 18 in both men's and women's singles, will start directly from the pre-quarter-finals on completion of the Super Draw on February 14. If any slot is left vacant then players with top BAI Rankings' will be considered to fill up rest of the top 8, who will get a direct entry into the pre-quarters.

The youngsters will benefit due to the withdrawal of Prannoy and Srikanth.

While Prannoy is recovering from a breathing problem triggered by an astroesophageal reflux disease (GERD) and plans to go to Boston, the USA to treat the problem after the All England, Srikanth too is battling niggles and have decided to skip the event ahead of the All England Championship.

In their absence, a fit-again Sameer, former champions Sai Praneeth and Kashyap will be the top stars in men's singles as the badminton extravaganza returns to Assam's capital after nine years.

Sameer, who won three titles last year and ended his season on a high by qualifying for the BWF World Tour Finals, will look to win the title for the second time, while Praneeth and Kashyap too will be in the recknoing.

One shuttler to look out for would be 18-year-old Lakshya Sen, who had reached the semifinals last time. A bundle of talent, Lakshya has won a gold medal in the Junior Asian Championship and bronze at the World Junior Championship besides winning the TATA Open last year.

In doubles, the top 4 teams within top 50 will be placed in the quarter-finals. However, it will an open field with doubles stars Satwiksairaj Rankireddy (injured), N Sikki Reddy and B Sumeeth Reddy (who are getting married) and Ashwini Ponnappa (not playing with any other partner) -- all missing the event.

Sindhu, champion in 2011 and 2013 as well as the runner-up in the last edition, is the top seed in women's singles. Defending champion Saina will be the only seed representing PSPB as she eyes a fourth Nationals title.

AAI's Shriyanshi is the third seed, followed by Ashmita of Assam, Kanika and Anura, both of the Railways. Sai Uttejitha Rao Chukka belonging to Andhra is the seventh seed while AAI's Aakarshi is seeded eighth. Arjun MR and Shlok Ramchandran have received the top billing in men's doubles and are followed by the pairs of Anjan Buragohain-Ranjan Buragohain, Krishna Prasad Garaga-Dhruv Kapila and Prakash Raj-Vaibhaav.

Meghana Jakkampudi and Poorvisha S Ram are the women's doubles top seeds while Ashna Roy and Karishma Wadkar are the second seeds.

The pairs of Aparna Balan-Sruthi KP and Agna Anto-Sneha Santhilal are the third and the fourth seeds respectively. The mixed doubles draw is headed by the World No. 46 combine of Rohan Kapoor and Kuhoo Garg. Saurabh Sharma-Anoushka Parikh, Dhruv Kapila-Meghana Jakkampudi and Vighnesh Devlekar-Harika V are the next three seeds.