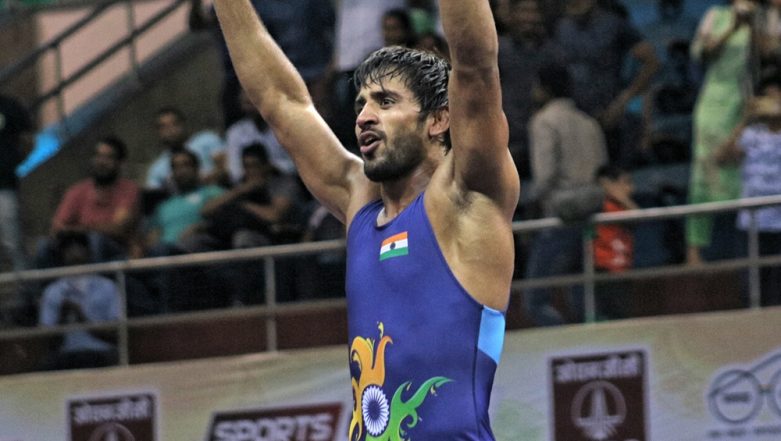 New Delhi, July 26: Ace wrestler Bajrang Punia has set his eyes on the World Championship as he looks to seal Olympic qualification as quickly as possible. On Friday, the 25-year-old sealed his place in the Indian World Championship squad with an easy win over Harphul Singh in the trials. The presence of Bajrang in the 65kg trials meant that most wrestlers in the category preferred to stay away. Tokyo Olympics 2020: Indian Women’s Hockey Squad Announced for the Test Event.

"Preparations are going well," Bajrang told reporters after the trials at New Delhi's Indira Gandhi Indoor stadium. "I am training in such a way that I don't sustain any injuries." Bajrang and fellow 2018 Asian Games gold medallist Vinesh Phogat were not exempted from the trials for selection in the squad that goes to Kazakhstan in September for the Worlds.

Bajrang said that the trials were a good measure for him to gauge as to where he is with regard to preparations. "Everyone knows that the World Championship is a big tournament, probably second only to the Olympics. In fact, in the Olympics there will only be 16 athletes, whereas in the Worlds there might be about 40 to 45. I am hoping that I qualify for the Olympics here itself so that I get time to prepare after that," he said.

Bajrang said that he is working on his leg defence and hoping to curb his tendency to concede points early on. "We have been working on it. All points that I concede are through the leg. My thinking was that I can tire out the opponent even if I give away a few points," he said.

He is, however, avoiding making drastic changes in his stance in the process. "No athlete benefits from changing their natural game. I am trying to make improvements by following whatever schedule the coaches are setting up for me so that I can avoid mistake at the Worlds or the Olympics," he said.

Bajrang said that he will be playing a tournament outside the country before the start of the World Championships. "I have a tournament in Georgia or Belarus, not sure which at the moment. I will be looking forward to playing a tournament so that I can properly gauge as to where I am in terms of my preparation," he said.