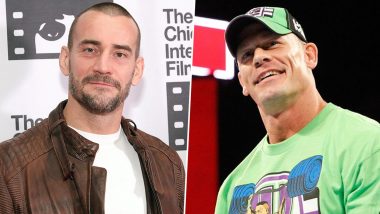 Former WWE superstar CM Punk made a shocking revelation on this past episode of WWE Backstage. Punk revealed that it was not John Cena, he was supposed to win Royal Rumble match 2008. However, Vince McMahon favoured John Cena at that time and he did not get the push in his career which he deserved that time. CM punk who is a correspondent on WWE Backstage went on to say during the show that his victory for Royal Rumble Match 2008 was already decided, however at the very last moment John Cena stole away the limelight from him. WWE Raw June 15, 2020 Results and Highlights: Randy Orton Defeats Christian in ‘Unsanctioned Match’; Seth Rollins Gets Attacked By Dominik (View Pics)

CM Punk throughout his career has been known for his great wrestling talent. Apart from this, his fans love him for bluntly voicing his opinion against WWE and Vince McMahon for favouritism. In the past, Punk went on a furious rant against McMahon through his infamous 'Pipe Bomb.' In the recent episode of WWE Backstage, CM Punk took a dig at John Cena, that he took away the win from him in Royal Rumble Match 2008.  Punk said that John Cena was out of action for three months due to torn pectoral muscle before he made a return at WWE Royal Rumble match 2008. “I was supposed to win! I was supposed to win that Royal Rumble, then John Cena comes back after three months from a torn pec. Thanks a lot, John.” CM Punk said this on June 16, 2020 episode of Backstage.  WWE Backlash 2020 Results And Highlights: Randy Orton Emerges Victorious Against Edge in ‘The Greatest Wrestling Match Ever’, Drew McIntyre Defeats Bobby Lashley to Retain His Title (View Pics)

John Cena was last seen in action against Bray Wyatt at WrestleMania 36, in which he lost Wyatt in Firefly Fun House match. Speaking about CM Punk, his regular appearance at WWE Backstage gives us hope of him making his return to wrestling ring soon.

(The above story first appeared on LatestLY on Jun 19, 2020 08:49 AM IST. For more news and updates on politics, world, sports, entertainment and lifestyle, log on to our website latestly.com).