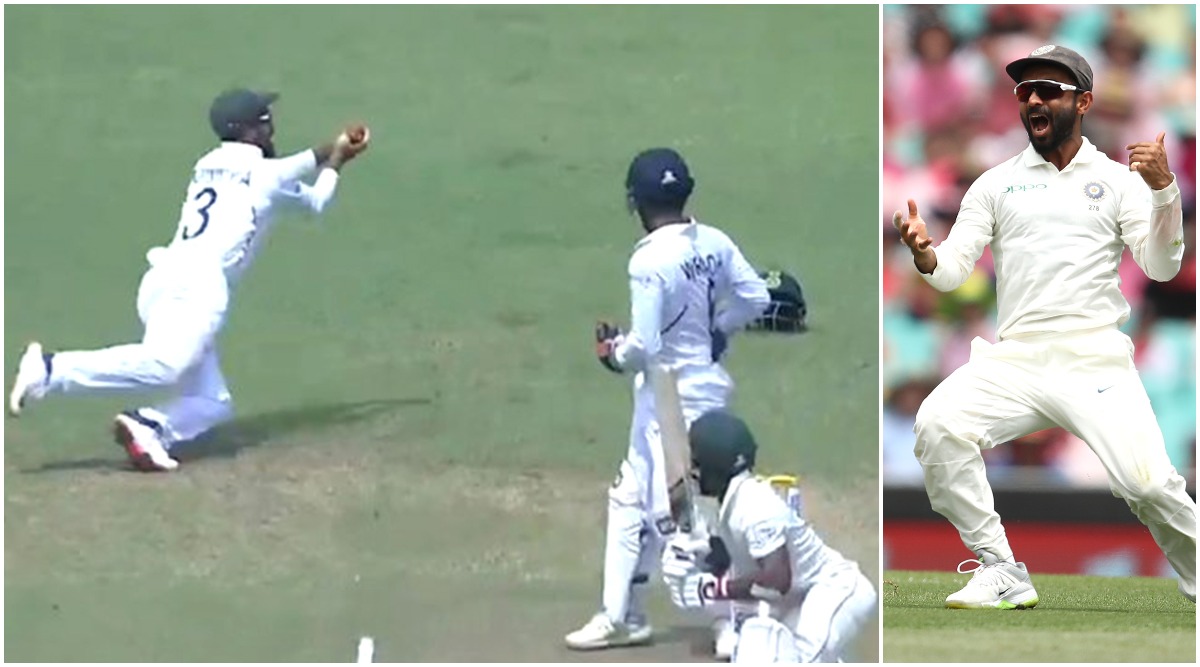 Ajinkya Rahane took a stunning catch at first slip to dismiss Temba Bavuma and leave South Africa starring at another humiliating defeat in the three-match Test series. Rahane, who is a regular at first slip for team India, took the spectacular catch to send back Bavuma off the bowling of Ravindra Jadeja. His catch also was another example of the improved fielding standard in the Indian cricket team. Rahane’s quick reflexes to hold the Bavuma catch left South Africa at 125/6, still behind by 202 runs. India, who enforced the follow-on on South Africa after bowling them out for 275 in the first innings, can seal the Test series victory with four more wickets with a match in hand. India Vs South Africa, Live Cricket Score 2nd Test Match.

Bavuma, who had struggled to get going after being promoted to No 4 for the 2019 India Tour, was closing in towards a maiden Test fifty in India. The 29-year-old right-hander looked confident during his 63-ball stay at the crease before Rahane’s stunner send him back. Bavuma scored 38 runs, which included four boundaries and one maximum over the fence. Just one delivery before the eventual dismissal India had wasted a review that added to Kohli’s woes of a disastrous review record. Click to Watch Rahane's Stunner At First Slip.

The catch occurred in the second delivery of the 44th overs bowled by Jadeja. The full delivery – which spun away from the right-hander – tempted Bavuma into playing the drive. The ball foxed Bavuma and kissed his outside edge before being snapped up by Rahane at first half. It was a terrific catch by the Indian Test deputy captain given the speed with which the delivery was travelling.

Did Rahane Just Do A Dravid

Did @ajinkyarahane88 just do a #Dravid in the slips? Amazing catch. #INDvSA #INDvsSA #IndiaVsSouthAfrica

Its All Safe Behind the Stumps

Thoroughly impressed by India's fielding behind the stumps at Pune. Be it @Wriddhipops or @ajinkyarahane88 , the team's effort on a slow turner says why you need to work hard in fielding as much as batting and bowling to dominate the proceedings. #INDvSA

Super Catch By the Super Man

First Wriddhiman Saha and now @ajinkyarahane88, India's catching has been top class. Jinx took the catch when the ball had gone past him. They say watch till the end. Domination in all the three departments of the game. #INDvSA

Meanwhile, Bavuma’s dismissal – only second South African batsman to cross double figures in the second innings – left India needing four more wickets to win the Pune Test and seal the three-match Test series with a game in hand. Earlier, Ishant Sharma trapped Aiden Markram for another two-ball duck to make the opening batsman fourth South African opener to bag a Test pair in India, before Ravi Ashwin and Jadeja spun a web in the Proteas line-up with two wickets each. Umesh Yadav, who took a three-wicket haul in the first essay also chipped in with a wicket.