Satterthwaite will continue to play domestic cricket for Canterbury Magicians apart from a contract in the Hundred with Manchester Originals in August. She made her international debut in 2007 and went on to represent New Zealand in 111 T20Is and 145 ODIs. 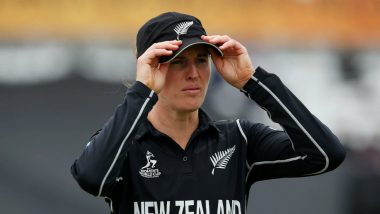 Christchurch, May 26: New Zealand all-rounder Amy Satterthwaite has announced her retirement from international cricket after being informed by New Zealand Cricket (NZC) that she would not receive a central contract for the 2022/23 season. Satterthwaite, New Zealand's most capped women's ODI player, also served as a full-time captain of the side in 2018 and 2019. She made her international debut in 2007 and went on to represent New Zealand in 111 T20Is and 145 ODIs. Umar Gul, Ex-Pakistan Pacer, Appointed Bowling Coach of Afghanistan

In ODIs, Satterthwaite amassed 4,639 runs at an average of 38.33, becoming New Zealand's second-highest scorer behind opener Suzie Bates, including seven centuries, four of which came in consecutive innings during the 2016/17 season, equalling the world record alongside Sri Lanka men's batting legend Kumar Sangakkara.

She also picked 50 wickets with her off-spin in the 50-over format. In T20Is, Satterthwaite had a modest record, making 1,784 runs at an average of 21.49, including a half-century while picking 26 wickets. "It is with a degree of sadness that I announce my retirement from international cricket. It has been a tough few days after learning of NZC's decision to head in a new direction and contract some younger cricketers," said Satterthwaite on her abrupt ending to her 15-year international career.

"I am disappointed not to be receiving a contract and believe I still had more to offer, however, I respect NZC's decision and I wish the WHITE FERNS all the best as they embark on an exciting winter of cricket, including the Commonwealth Games. I'll be supporting them all the way," added the left-handed batter.

Satterthwaite will continue to play domestic cricket for Canterbury Magicians apart from a contract in the Hundred with Manchester Originals in August. She took a break from international cricket in 2019 for giving birth to her daughter Grace and returned to cricketing action nine months after childbirth in September 2020. "Most importantly I want to thank my family: Mum, Dad, Lea, and Grace, for their unconditional support throughout. Without them, it simply wouldn't have been possible. To all my teammates past and present, coaches and support staff, I appreciate everything you've done to help me as a cricketer and make my time with the WHITE FERNS special."

"I'm immensely proud of my journey with the WHITE FERNS and especially taking the time away to give birth to our daughter, Grace, before returning to play international cricket. I didn't know if I would ever make it back to the top level and I hope my story can inspire other mums and mums-to-be that it is possible to follow your career dreams and start a family."

Bryan Stronach, NZC's general manager of high performance, lauded Satterthwaite's achievements but explained that the contracts list to be out on Friday will see more youngsters being handed contracts with a focus on T20I cricket.

"Amy will be remembered as one of our best cricketers; her record is outstanding, and she can feel really proud about what she has achieved - not just for herself and the team, but also for all the players she has inspired and enabled."

"Essentially, we're looking to the future and want to give some younger cricketers a chance to develop their skills surrounded by our high-performance systems. We also considered the immediate playing programme and next pinnacle events - both heavily weighted towards T20I cricket."

New Zealand will feature in the Commonwealth Games later this year in Birmingham, followed by the Women's T20 World Cup in South Africa in early 2023. They are yet to confirm their new head coach following Bob Carter's departure after the ODI World Cup at their home this year.

(The above story first appeared on LatestLY on May 26, 2022 02:48 PM IST. For more news and updates on politics, world, sports, entertainment and lifestyle, log on to our website latestly.com).