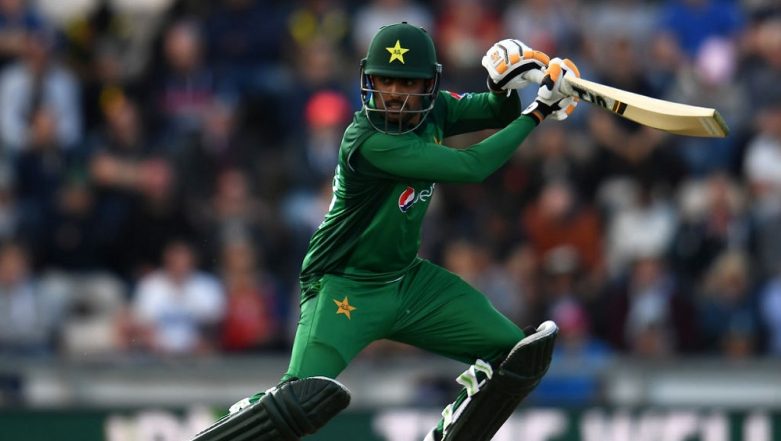 Babar Azam played a perfect inning at the right time when his team needed to deliver. The 24 years old Azam scored a century where he made an unbeaten 101 runs from 126 balls. This is Babar Azam's first century in the World Cup and he is first Pakistani cricketer to score a century in ICC Cricket World Cup 2019. Pakistan defeated New Zealand by 6 wickets. With this win, Pak keeps their semi-final hopes alive as they move up the point table to the sixth position with 7 points. Shaheen Afridi Returns Impressive Figures of 3/28 Against New Zealand During PAK vs NZ CWC 2019 Match.

Earlier, New Zealand skipper Kane Williamson won the toss and elected to bat first. Kiwi batting line up completely collapsed due to some fine bowling by Shaheen Afridi and Shadab Khan. Pak pace bowler Shaheen took three crucial wickets of Colin Munro, Ross Taylor and Tom Latham as he ended with the figure of 3/28.  While Shadab Khan took an important wicket of Kane Williamson. However, hundred run plus partnership between James Neesham and Colin de Grandhomme helped Kiwis post a target of 238 runs. Mohammad Amir Bowls Most Balls Without Being Hit for a Six in CWC 2019, Ends Up Conceding One During PAK vs NZ Match.

Pakistan inning did not start well as they lost opener Fakhar Zaman and Imam-ul-Haq earlier in the inning. However, Azam formed a partnership with Mohammad Hafeez to take Pakistan in a strong position. Hafeez fell prey to Williamson in the 25th over. From there onwards, Babar Azam was well supported by Haris Sohail who is in tremendous form. Sohail scored 68 from 76 balls when Pak needed only 2 runs to win from 10 balls.

A wonderfully mature innings that's taken his side to the cusp of victory.#NZvPAK pic.twitter.com/EIamI5ywbq

The winning runs were hit by Pak skipper Sarfaraz Ahmed. Now Pakistan will play next against Afghanistan on June 29, 2019, at Leeds. After that, they will play their final league match against Bangladesh on July 5 at the Lord's Cricket Ground in London. Pakistan will have to win both their remaining games to enter into the semi-final.