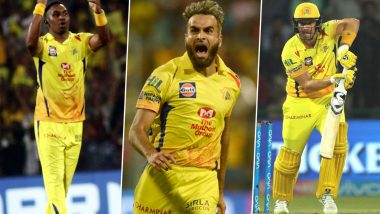 Chennai Super Kings will fight for their fourth IPL title in the 13th edition of the Indian Premier League (IPL 2020). However, the MS Dhoni-led side has been jolted by two major blows even before the start of the tournament. Regular vice-captain Suresh Raina and veteran off-spinner Harbhajan Singh have pulled out of the T20 extravaganza which has left a great void in the team. Nevertheless, CSK have the knack of defying the odds and taking them lightly will not be vice for the opposition teams. However, it will be interesting to see what combination MSD will field throughout the tournament. CSK Team Profile for IPL 2020: Chennai Super Kings Squad in UAE, Stats & Records and Full List of Players.

The Three-Time IPL winners like to build a solid base of the playing XI in the first few matches which isn’t tinkered much throughout the tournament.  However, with Raina, who has been the cornerstone of CSK batting line-up over the years, Dhoni might have to explore with some options. Choosing foreign players of the team might also be tricky as a side can field only four non-Indian players. As IPL 2020 take a countdown, let’s look at foreign players who are likely to feature in CSK playing XI throughout the season. Team CSK Key Players for IPL 2020: MS Dhoni, Shane Watson, Deepak Chahar and Other Cricketers to Watch Out.

The Aussie star enjoyed a sensational run in the last couple of seasons for CSK but delivering the spin-friendly pitches will not be easy. Watson will have the onus to give CSK flying starts by taking on the bowlers in the initial overs. However, maintaining fitness throughout the 53-day tournament will be a big challenge for the 39-year-old all-rounder.

The former Proteas skipper has been associated with CSK for a long time and will have an important role to play in IPL 2020. Du Plessis can aggregate quick runs in the non-powerplay overs, and his knack of staying in the crease for long makes him an even bigger headache for the opposing teams. Also, his performance will be even more significant this time as Raina will not play in the XI.

The two-time Purple-cap winner has been the unsung hero of CSK over the years, and it will be interesting to see what he can offer in the forthcoming event. Pacers might not get a lot of help in UAE. However, Bravo’s slower deliveries will be a massive asset in the dead pitches. Also, one must not forget his hitting abilities in the end overs.

With Harbhajan Singh not in the team, Imran Tahir will handle the mantle in the spin department. The South African star was the highest wicket-taker of IPL 2019 and will not mind winning the purple cup again. The spin-friendly pitches of UAE are ideal for Tahir, and his stellar run in CPL 2020 will boost his morale even more.

The players will be part of CSK’s initial scheme of things. However, injuries or any other issue will bring the other foreign players in action. The likes of Mitchell Santner, Sam Curran and Josh Hazlewood are the proven stars of T20 start and will be a potent replacement for any foreign player. Meanwhile, MS Dhoni’s men will start their campaign against defending champions Mumbai Indians on September 19 at the Sheikh Zayed Stadium in Abu Dhabi.

(The above story first appeared on LatestLY on Sep 15, 2020 03:24 PM IST. For more news and updates on politics, world, sports, entertainment and lifestyle, log on to our website latestly.com).