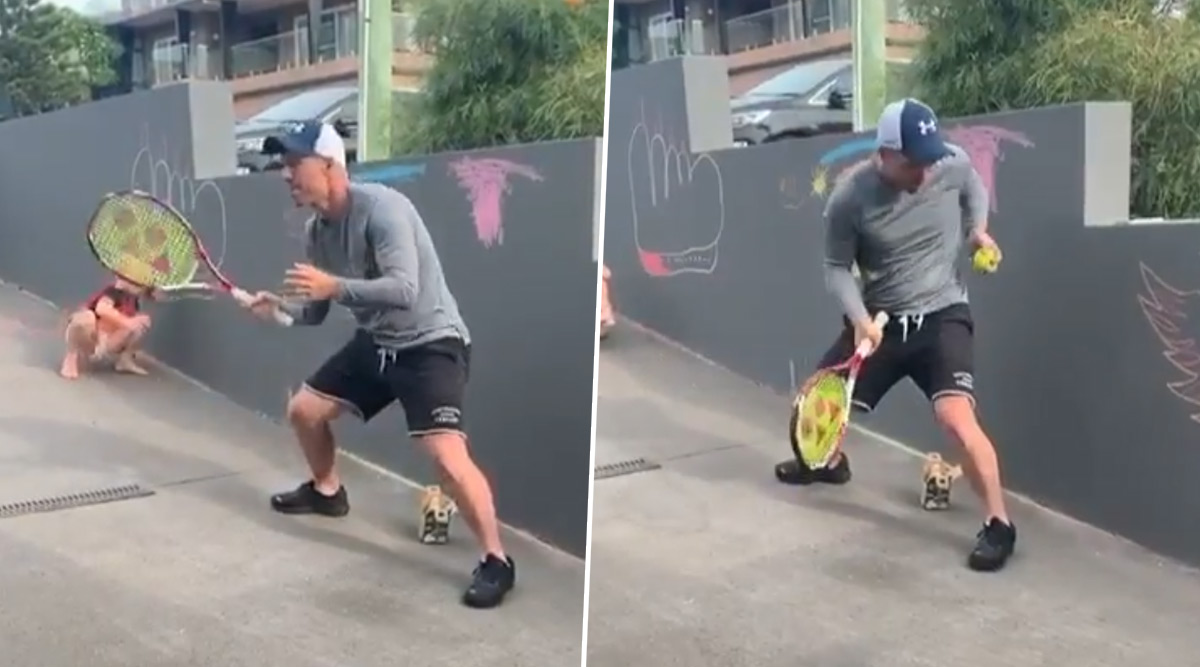 The entire sporting world has been brought to a standstill due to the coronavirus pandemic and sporting competitions have been either cancelled or suspended until further notice. People across the globe have been advised to stay inside their homes in self-isolation as a precautionary measure to prevent the spread of COVID 19. With no sports on the horizon for a near future, sports stars are taking this break to get themselves in shape by training at home and the recent athlete to share his workout regime was David Warner. Ben Stokes Plays Golf As England All-Rounder Enjoys His Time in Self-Quarantine (Watch Video).

Sunrisers Hyderabad skipper David Warner recently posted a video of himself playing tennis in the backyard. The Australian cricketer is using his time in quarantine to tone his skills as he interestingly found a way to work on his catching technique while playing tennis. ‘Just trying to keep up the skills with some one-hand catching. Remember soft hands,’ the Australian captioned his post. David Warner Takes Part in ICC's Isolation Game, Kane Williamson Comes Up As His 'Quarantine Partner' to Make Tik Tok Videos.

Just trying to keep up the skills with some one hand catching. Remember soft hands 😂 #Bullsdaycare

The 33-year-old was supposed to prepare for the upcoming edition of the Indian Premier League. But it was recently announced that IPL 2020 has been suspended until April 15 and according to recent reports, there is a possibility of the cash-rich league to be postponed until the end of the year or being completely cancelled.

The Australian was recently a part of the ODI game against New Zealand but the series was suspended due to the coronavirus pandemic. More than 380,000 people have been tested positive for COVID 19 around the world with close to 17,000 people losing their lives in this battle.