Delhi Capitals vs Kings XI Punjab Head-to-Head Record: Ahead of the IPL 2020 Match No 2, Here Are Results of Last Five DC vs KXIP Matches 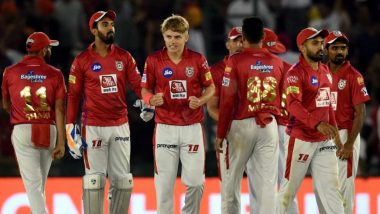 Kings XI Punjab under the leadership of KL Rahul consists of fine cricketers like Jimmy Neesham, Glen Maxwell, Chris Gayle, Nicholas Pooran, Mujeeb ur Rahman who are good in T20s. They also have good pacers like Mohammed Shami and Sheldon Cottrell. Speaking about Shreyas Iyer's Delhi Capitals they are loaded with a good combination of experienced and young talents. With the inclusion of Ajinkya Rahane and Ravichandran Ashwin in the side, the team has become more strong. Shikhar Dhawan, Prithvi Shaw, Rishabh Pant Kagiso Rabada to name a few are key players for DC. Kings XI Punjab and Delhi Capitals have met played 24 matches against each other, in which KXIP has won 14 games, while DC has emerged victorious on 10 occasions. Now ahead of DC vs KXIP IPL 2020 match, let us take a look at the results of the last five encounters of these two teams. DC vs KXIP Dream11 Team Prediction IPL 2020: Tips to Pick Best Fantasy Playing XI for Delhi Capitals vs Kings XI Punjab Indian Premier League Season 13 Match 2.

Delhi Capitals will never want to remember this match as they faced a humiliating defeat in this game by Kings XI Punjab. Delhi side was bowled out for 67 runs, in reply Punjab side chased down the total under eight overs where Martin Guptill scored 50 in just 27 balls.

Kings XI Punjab defeated the home team in this game by four runs after successfully defending the target of 144 runs. Shreyas Iyer did score a half-century in this game, however, it went in vain as Ankit Rajpoot and Andrew Tye from Punjab's side bowled well in the death to ensure that visitors win by four runs.

A half-century by Gautam Gambhir and a good cameo by Rishabh Pant helped Delhi post a total of 166/7. However, half-centuries by KL Rahul and Karun Nair helped Punjab chased down the target with ease with six wickets in hand.

The home team won this match due to a hat-trick by Sam Curran. Delhi Capitals were very much into this game when they needed 23 runs from 22 balls to reach the target of 167 runs. However, Sam Curran's figure of 4/11 which included a hat-trick took the game away from DC as they lost their last seven wickets for just 8 runs to lose the game by 14 runs.

Delhi Capitals won this game by five wickets as they reached the target of 164 runs quite comfortably. Shikhar Dhawan and Shreyas Iyer half-centuries helped DC win this match.

Considering head to head records and results from the last five matches, Kings XI Punjab has more victories to their name. It will be interesting to see how both team battles to bag those important winning points in IPL 2020.

(The above story first appeared on LatestLY on Sep 20, 2020 07:01 AM IST. For more news and updates on politics, world, sports, entertainment and lifestyle, log on to our website latestly.com).