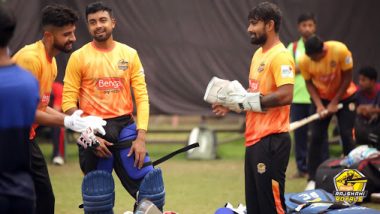 Dhaka are the most decorated side in the history of BPL as they have managed to win the tournament three times and have finished as runners-up on two occasions, so expectations will be high this time around. The major absentee from their side will be star all-rounder Shakib Al Hasan as he is serving a ban right now but they can count on the likes of Tamim Iqbal, Thisara Perera and Laurie Evans to fill the vacant spot left by Shakib. Platoons will be captained by former Bangladesh Skipper Mashrefe Mortaza. BPL 2019-20 Complete Squads: Full Players List of All Bangladesh Premier League T20 Teams.

Rajshahi Royals, on the other hand, have not had much success in the previous editions but this time they have made a statement of intent by drafting the likes of Andre Russell, who will also captain the side. The West Indian powerhouse will be joined by some spectacular players like Hazratullah Zazai, Ravi Bopara and veteran all-rounder Shoaib Malik.

Dhaka Platoons vs Rajshahi Royals in Bangladesh Premier League 2019-20 clash will be played at Sher-e-Bangla Stadium in Mirpur on December 12, 2019. DHP vs RAR match is scheduled to start at 01:00 pm IST and 01:30 pm local time.

How to Watch Live Telecast of Dhaka Platoons vs Rajshahi Royals, BPL 2019-20 in India (TV Channel and Broadcast Details)

DSport is the official broadcaster of the Bangladesh Premier League 2019-20 in India. So Fans from the Subcontinent can enjoy the Dhaka Platoons vs Rajshahi Royals clash on DSport. Fans from Bangladesh can watch the DHP vs RAR clash live on Maasranga Television as they have received the official broadcasting rights. BPL 2019-20 will be televised live by Fox Sports in Australia while Geo Super will telecast the league live in Pakistan.

Where to Get Free Live Streaming Online of Dhaka Platoons vs Rajshahi Royals, BPL 2019-20 Match?

Both teams have some brilliant talent and extreme depth in their squad, so it will be an interesting clash the teams will be looking for a win in their opening game.

(The above story first appeared on LatestLY on Dec 12, 2019 08:49 AM IST. For more news and updates on politics, world, sports, entertainment and lifestyle, log on to our website latestly.com).