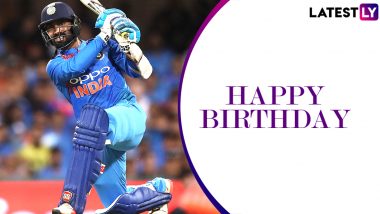 One of the finest players to represent India on the international level, Dinesh Karthik celebrates his 35th birthday today (June 1, 2020). Karthik began playing cricket at the age of 10, and in his early years was coached by his father, who was also a first-division cricketer from Chennai. Born in Tamil Nadu, the right-handed batsmen has played as well as captained the state’s team in domestic format after being promoted through the ranks. Dinesh Karthik Wants IPL to Happen So That He Can Work With McCullum and Eoin Morgan.

Dinesh Karthik has represented India in all three formats of the game. The right-handed batsman made his debut for the national side in September 2004, in an ODI game against England and few months later was handed his Test cap against Australia in Mumbai. The Tamil Nadu cricketer made his T20I debut in 2006 and was a crucial part of the Indian squad which lifted the inaugural 2007 Twenty-20 World Cup. So on Karthik’s birthday, we take a look at some of his best performances.  Dinesh Karthik Opens Up About Batting Above MS Dhoni in 2019 World Cup Semi-Final Against New Zealand.

This is Dinesh Karthik’s only century in the longest format of the game and it came during India’s tour of Bangladesh after the 2007 World Cup exit. The visitors were put to bat by the hosts, and they replied by mounting 610 runs on the board, with the top 4 batsmen each scoring a century. Karthik smashed 129 in 212 balls, with 16 boundaries.

One of Dinesh Karthik’s finest knock in an Indian jersey came against Australia during the warm-up match ahead of the 2013 ICC Champions Trophy. After electing to bat first, the Indian top-order collapsed as they found themselves 55/5 at one stage but Karthik’s 146 not out, took them to a score of 308. India won that game by 243 runs.

This knock came in the sixth season of the IPL, as Karthik staged yet another rebuilding job for his side but this time in the blue jersey of Mumbai Indians. After losing Ricky Ponting and Sachin Tendulkar with just two runs on the board, Karthik scored 86 in 48 balls with a strike rate of 179 as MI registered 209/5 and eventually won the game by 44 runs.

Yet another example of how Dinesh Karthik steadied the ship from a dire situation. The batsman walked in at with KKR struggling 24/3 in the IPL 2018 eliminators against Rajasthan Royals. Even with the pressure on his shoulder, Karthik never looked fazed and registers a commendable half-century in 35 deliveries to help his side post a respectable total and ultimately qualify for the 2nd playoff.

No matter what Karthik has done or will do in his glittering career, he will always be remembered by cricket fans all around the world for this magical knock against Bangladesh in the final of the 2018 Nidahas Trophy. With India needing 34 off 12 deliveries, Karthik smashed 22 runs in the final over with a six on the last ball of the innings to crown India as champions from a seemingly lost cause.

(The above story first appeared on LatestLY on Jun 01, 2020 08:45 AM IST. For more news and updates on politics, world, sports, entertainment and lifestyle, log on to our website latestly.com).