Dinesh Karthik Opens Up About Batting Above MS Dhoni in 2019 World Cup Semi-Final Against New Zealand, Says, ‘It Came as a Surprise’ 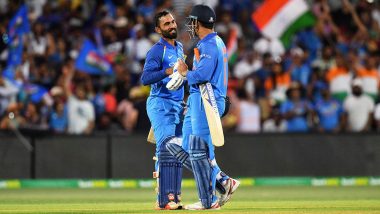 India faced a heart-breaking loss against New Zealand in the semi-finals of ICC Cricket World Cup 2019. Chasing a small-looking target of 240 runs in the bowlers-friendly Manchester track, the Men in Blue faced a top-order collapse and subsequently lost the game by 18 runs. Veteran wicket-keeper batsman MS Dhoni came to bat at number seven in the all-important encounter and many spectators and experts were shell-shocked by the decision. Recently, Dinesh Karthik, who batted at number five in that game, opened up about the strategy to team management in that game. The right-handed batsman said that the decision came as a surprise to him but he was sent as a ‘rear-guard action’ after the top-order got rattled. Ishant Sharma Reveals How Captain MS Dhoni Helped Him to Bowl Bouncers During 2014 Lord’s Test Against England.

“It came as a bit of a surprise because they had made it very clear that I would be batting at number seven. We had to send a rear-guard action just to stem the flow of wickets. I was told to pad up and it all happened in a daze, in a hurry,” Karthik was quoted as saying in Cricbuzz.

India’s top-order enjoyed a sensational run in the group stage of the tournament. However, in the knock-out game against the Kiwis, Rohit Sharma, KL Rahul and skipper Virat Kohli were dismissed after scoring mere one run. Talking further about the game, Karthik said that Dhoni didn’t get much opportunity to bat in World Cup and thus, going in to bat in the semi-final in the semi-final could have been tricky.

“There were many games when a lot of the middle order didn’t even get to bat. It was a hard thing because someone like Dhoni likes to play an x number of balls in a tournament especially leading up to the semi-final. It could be hard in that tournament,” he added.

Karthik was dismissed after scoring just six runs in the match. At one point, the Virat Kohli-led side was reeling at 92/6. However, MS Dhoni joint forces with Ravindra Jadeja (77) and added 116 runs for the seventh wicket. The former Indian captain even seemed like guiding his side over the line. However, he got run out on 50 and later, New Zealand registered an 18-run victory.

(The above story first appeared on LatestLY on Apr 22, 2020 10:22 PM IST. For more news and updates on politics, world, sports, entertainment and lifestyle, log on to our website latestly.com).