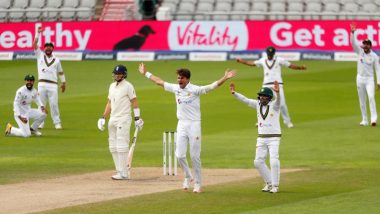 Pakistan were off to a brilliant start with the ball on day 2 of the England vs Pakistan first Test match. Their pace attack restricted England to 12-3 within six overs with Mohammad Abbas taking two wickets and Shaheen Afridi took the other to leave the hosts tottering with their entire top-order in the hut. The pair’s quick wickets certainly excited Twitter with many netizens taking to the social media platform to express their delight in watching them bowl in tandem. Many also were excited about the young quick prospect Naseem Shah. Pakistan vs England Live Score Updates of 1st Test Day 2.

Shaheen Afridi trapped Rory Burns in the very first over. Burns was caught in two minds while trying to play a length delivery and although the umpire turned down the appeal, Pakistan overturned that call with a review. Two overs later, Mohammad Abbas trapped Dominic Sibley with a nipper after setting the right-hander up with some deliveries from outside the off-stump. Abbas then bowled a peach of a delivery to bowl Ben Stokes leaving England reeling. Shan Masood Becomes First Pakistan Opener to Score a Test Century in England Since Saeed Anwar in 1996, Registers his Fourth in Tests.

What a start from Pakistan! 🔥🔥🔥 #ENGvPAKpic.twitter.com/baDaNCMxmd

What a stunning display of fast swing bowling from the Pakistani bowlers. THIS is what we've been waiting for!#ENGvPAK #ENGvsPAK

Although naseem shah, shaheen afridi & abbas ali are nowhere near the calibre of james Anderson, Stuart broad & chris woakes but they are bowling exceptionally well at the moment #ENGvPAK

Mohammad Abbas All Over England

Mohammad Abbas all over England like a rash! What a peach to get Stokes! Pakistan mean business here. Brilliant bowling! #ENGvPAK

Meanwhile, After Stokes Goes for a Duck

Special Gift from Abbas to Stokes

What a start from Pakistan! 🔥🔥🔥 #ENGvPAK

Something Special From Special Abbas

"It takes something special to get Stokes out, and that from Abbas is special," says Nasser Hussain #ENGvPAK pic.twitter.com/Kh0OJRxqgH

There's More to the Party

Pakistan still have another fast bowler to come on yet, plus two world class spinners 👍🏾 #ENGvPAK #bbccricket

#ENGvPAK No doubt says about Pakistan is produced 'Pace battery' 🔋. They have accurate, line length and hit to wicket. These combition to get series win after 1996. pic.twitter.com/AmuBp4Tuhy

Earlier, Shan Masood scored a brilliant 156 from 319 deliveries to help Pakistan post 326 on board after they had opted to bat first. Pakistan lost Babar Azam early and Mohammad Rizwan managed only nine runs from 41 deliveries before Chris Woakes ended his struggle. Shadab Khan, however, gave good company to Masood and helped the latter score his fifth Test hundred. Shadab was dismissed on 45 but Masood went on to record 150-plus score.

(The above story first appeared on LatestLY on Aug 06, 2020 11:09 PM IST. For more news and updates on politics, world, sports, entertainment and lifestyle, log on to our website latestly.com).