England vs West Indies 3rd Test 2020: Joe Root, Shanon Gabriel and Other Key Players to Watch Out for in Manchester 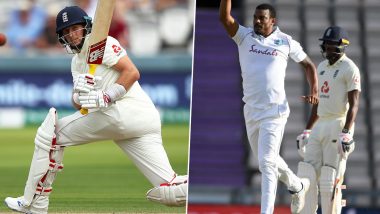 Cricket fans must brace themselves as England and West Indies are set to lock horns in the third and deciding encounter of the series. Just like the second game, this match will also be played at Old Trafford in Manchester and will get underway on Friday (July 24). Jason Holder and Co made a brilliant start to the series by clinching the opening encounter by four wickets. Nevertheless, the home side made a thumping comeback in the second game and registered a memorable 113-run victory. Below, we’ll look at some players who can leave a mark in the crucial game. England vs West Indies, Manchester Weather, Pitch Report & Rain Forecast.

Selecting the bowling line-up will be a huge headache of the England team management. Chris Woakes, Sam Curran and Stuart Broad impressed one and all in Manchester. However, the home team will be tempted to include James Anderson and Jofra Archer in the team. Also, the form of wicket-keeper batsman Jos Buttler will be a matter of concern for The Three Lions. For West Indies, Shai Hope or John Campbell might face the axe in the final game while Nkrumah Bonner can be drafted into the playing XI. Now, let’s look at some key players for the upcoming match.  England vs West Indies Dream11 Team Prediction: Tips to Pick Best Team.

The England captain didn’t have a great outing in Manchester and he’ll like to turn the tables around in the upcoming game. He was troubled by the out-swinging deliveries in his previous outing and the right-handed batsman must do his homework. Also, Root has been dismissed by Alzarri Joseph four times in his last six innings against West Indies. So, Jason Holder will surely give the ball to the young pacer when Root comes on to bat.

With 169 runs, Brooks has been the highest run-scorer for West Indies in the ongoing series. Despite not getting good starts from the top order, the right-handed batsman has showcased great resilience against the swinging red cherry. Riding on his good form, Brooks will aim to play a match-defining knock in order to guide to a historic series win.

The top-ranked Test all-rounder is enjoying the form of his life and his performance in the previous game must still be haunting the visitors. With 343 runs and nine wickets, Stokes is just not the highest run-scorer but also the leading wicket-taker of the series. Also, one must not forget that Stokes has a knack of performing in crucial games. Hence, the Caribbean team must do something out of ordinary in order to keep Stokes silent.

While everyone was busy with the Ben Stokes vs Jason Holder rivalry, another all-rounder who managed to leave an impact was Roston Chase. Despite not getting much help from the wickets, the off-spinner has consistently troubled the England batsmen. Also, he has brilliantly tackled the swinging deliveries of England pacers and played some crucial knocks.

After bagging a Man of the Match award in the opening game, Gabriel went wicket-less in Manchester but the England batsmen can’t afford to take him lightly. The right-arm pacer will want to replicate his Southampton heroics in the series decider and the overcast conditions will certainly provide him a great help.

Just like the first two games, unfortunately, rain is again expected to leave an impact in the upcoming game. Overcast conditions will be witnessed throughout the game and the match even under the threat of getting washed out. Hence, fans must keep their fingers crossed to enjoy a full-fledged game.

(The above story first appeared on LatestLY on Jul 23, 2020 05:02 PM IST. For more news and updates on politics, world, sports, entertainment and lifestyle, log on to our website latestly.com).