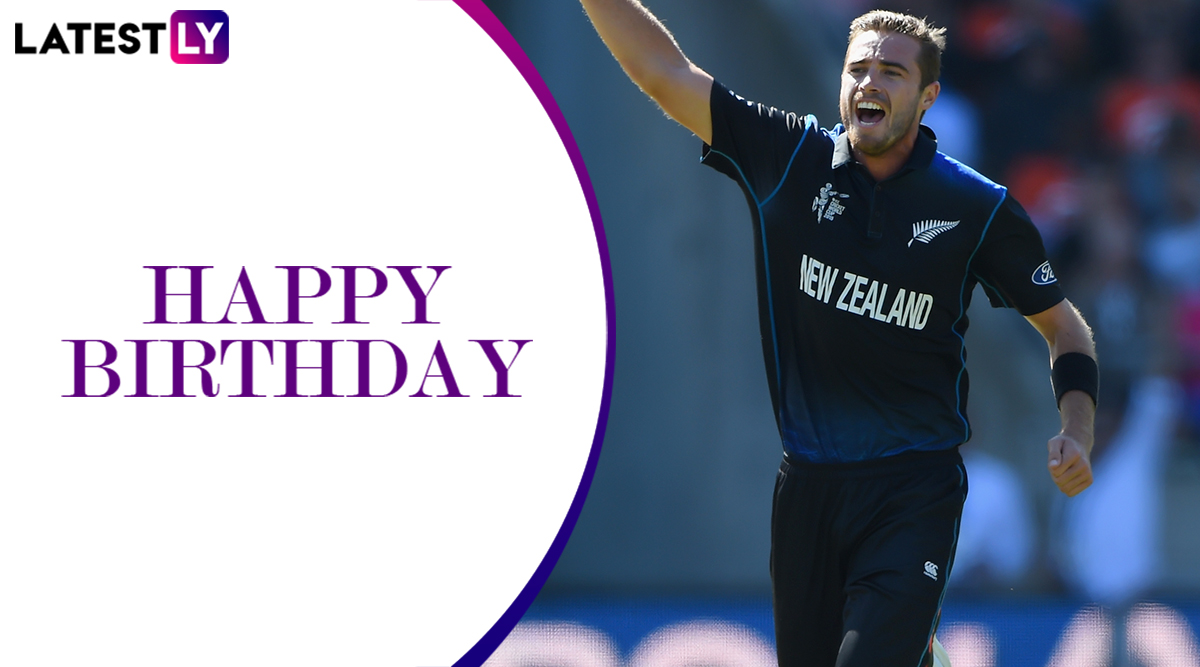 New Zealand’s veteran pacer Tim Southee celebrates his 31st birthday on Wednesday (December 11, 2019). The right-arm bowler has proved his mettle in all the formats of the game and is regarded as one of the best bowlers to have played for the Black Caps. Southee is not someone who can set the speed gun on fire but his ability to extract swing from the pitch and buckets of variations makes him a force to reckon with. Along with capabilities with the ball, the fast bowler is also a handy batsman lower down the order and has also handled the reins of the side in several matches. Ross Taylor Becomes 2nd New Zealand Cricketer to Smash 7000 Runs in Test Cricket.

7/33 Against England in Wellington

Southee played a vital role in guiding New Zealand to the finals of 2015 World Cup. He bowled many brilliant spells. However, his best performance came against England. Bowling against the likes of Jor Root, Eoin Morgan and Ian Bell, the bowler wreaked havoc and dented the English batting line-up. He went on to take seven wickets in the match which are the best figures a kiwi bowler in ODIs. England only could plunder 123 runs in the first innings and later lost the match by eight wickets.

7/64 Against India in Bengaluru

Pacers are not known to get much assistance from Indian pitches in the longest format of the game. However, Southee had some other ideas in the second Test of Kiwi’s 2012 Tour of India. The visiting side mustered 365 runs in the first innings which was not looking enough. Nevertheless, the right-arm speedster bowled a scintillating spell and his seven-wicket haul restricted the hosts to 353 runs. However, India made a comeback later in the match and clinch the clash by five wickets.

5/62 Against Sri Lanka in Colombo

Another Southee special in sub-continental conditions came in the second Test of Black Cap’s 2012 Tour of the island nation. On a pitch where the Kiwis piled up 412 runs in the first innings, the pacer bowled a gem of a spell and dismissed the likes of Tillakaratne Dilshan, Kumar Sangakkara and Angelo Mathews. Courtsey, Southee’s brilliance, Sri Lanka were packed for 244 runs in the first innings and later won the match by 167 runs.

5/33 Against Pakistan in Wellington

The opening ODI of Pakistan’s 2010-11 Tour of New Zealand witnessed a spectacular spell by the star pacer as he used the new ball to good effect and ran through the opposition’s batting order. Players like Mohammed Hafeez and Mishabh-ul-Haq looked completely clueless against him and the fast bowler scalped a five-fer. As a result, the Men in Green were bundled out for 124 runs and New Zealand chased the target with nine wickets in hands.

5/18 Against Pakistan in Auckland

The young pacer put up a fantastic display of fast bowling during the first T20I of Pakistan’s 2010-11 Tour of New Zealand and sealed the match for the kiwis in the first innings itself. Southee bagged a five-wicket haul which also included a hat-trick. His effort took the visitors by storm and they were restricted to 143 runs in the first innings. The total didn’t challenge the home side much as they registered a five-wicket victory.

Southee will be next seen in action when the Kiwis will horns with Australia for a three-match Test series. The experienced pacer looked in top-form in the recently concluded Test series against England and will look to extend his great run. The ICC T20 World Cup 2020 is also less than a year away and Southee must be gearing up to put up an excellent show and guide his side to the title.