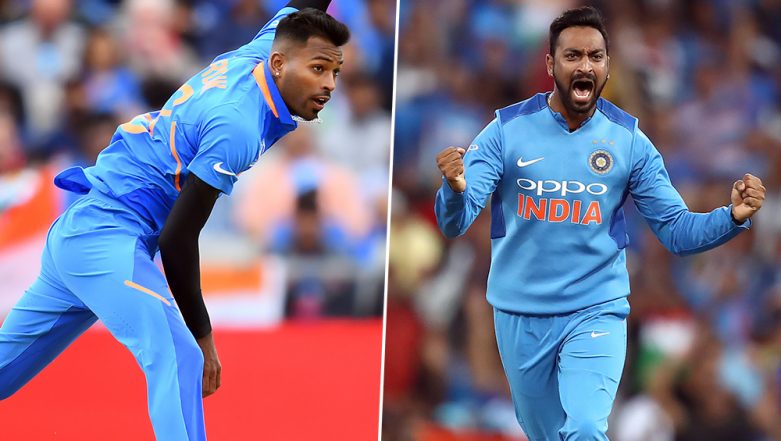 Indian Cricket Team brother duo of Hardik Pandya and Krunal Pandya trained against each other in net ahead of India vs South Africa T20I series. In the video below, Krunal Pandya can be seen bowling to his younger brother Hardik. The junior Pandya posted a video on Instagram of the net practice session. The Indian Cricket Team star all-rounder also wrote the caption to his brother 'Sorry for almost knocking your head off'. Hardik Pandya Wishes Shubman Gill on His Birthday With a Lovely Photo, Shares Heart-Warming Message for the Youngster (See Instagram Post).

Both all-rounders have made a place in Indian Cricket team squad for the upcoming three matches T20I series against South Africa. Hardik Pandya was rested for the recently concluded series in West Indies. While Krunal Pandya performed brilliantly on the Caribbean soil as he was awarded the Man of the Series for the three matches T20I series against West Indies. India vs South Africa 2019: Ahead of The Series, Here’s a Recap of How Both the Teams Fared in Their Last Bilateral Series.

Hardik and Krunal Train Against Each Other in Nets

Pandya 🆚 Pandya in training I think I won that round big bro @krunalpandya_official 😂😂 P.S: Sorry for almost knocking your head off 🤣🙏😘

The T20I series between India and South Africa will start from Sep 15, 2019. The first T20I match will be played at Himachal Pradesh Cricket Association Stadium in Dharamsala. The Indian team will be led by Virat Kohli while Proteas side will play under the captaincy of Quinton de Kock. After T20I series, both teams will also play 3 matches Test Series.