Mahela Jayawardene when asked in the video about the role of Hardik Pandya and Krunal Pandya in MI team. The head coach replied that Pandya brothers bring positive energy to the side and they have used the younger one in different roles. 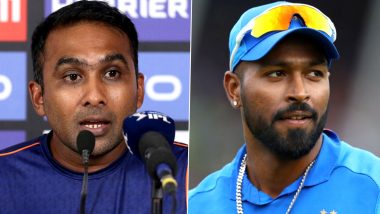 Defending champions Mumbai Indians (MI) is all set to begin Indian Premier League (IPL) 2020 campaign against previous season's runner up Chennai Super Kings (CSK). The match will begin at 7: 30 pm Indian Standard Time (IST) and it will take place at Sheikh Zayed Stadium, Abu Dhabi. MI fans will have eyes on Hardik Pandya who has been out of cricketing action for almost a year due to back injury. Mumbai Indians star all-rounder, however, looks in great shape and we can expect him to create an impact in IPL season 13. MI head coach Mahela Jayawardene in a recent video posted by the franchisee on their social media account revealed that Pandya is looking great in nets post-injury layoff. Scroll down to read more on what Jayawardene said in the recent video posted by Mumbai Indians ahead of MI vs CSK IPL 2020. MI vs CSK Dream11 IPL 2020: Rohit Sharma, MS Dhoni and Other Players to Watch Out For in Indian Premier League Season 13 Match 1.

Mahela Jayawardene when asked in the video about the role of Hardik Pandya and Krunal Pandya in MI team. The head coach replied that Pandya brothers bring positive energy to the side and they have used the younger one in different roles. Jayawardene further went on to say that it not always Hardik is given the responsibility to finish the game, there are other youngsters too in the side who are given an opportunity to do so as and when required. Hardik Pandya had a brilliant IPL 2019 season where he made 402 runs from 16 games with a strike rate of 191.42. He also scalped 14 wickets in the previous season. MS Dhoni, Hardik Pandya, Shikhar Dhawan and Others Left Puzzled by Gully Cricket Rules in Dream11’s TVC Ahead of IPL 2020.

🗣️ "Hardik is coming back from an injury but he's looking very good in the nets.” . #OneFamily #MumbaiIndians #MI #Dream11IPL @mahela27

Fans are also eagerly waiting to see CSK skipper MS Dhoni in action who was last seen on the field in the semi-final of ICC Cricket World Cup 2019 against New Zealand. Mumbai Indian's skipper Rohit Sharma will eye on picking up a victory in the opening game as MI last won their opening match of an IPL season in 2012.

(The above story first appeared on LatestLY on Sep 19, 2020 09:04 AM IST. For more news and updates on politics, world, sports, entertainment and lifestyle, log on to our website latestly.com).