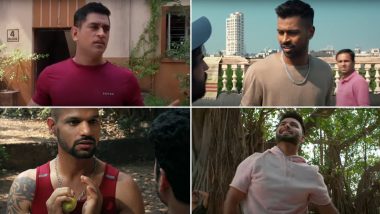 Cricket fever is high as the 13th edition of the Indian Premier League (IPL 2020) is set to get underway on September 19. With the tournament taking place in UAE, players of all the teams will have to tackle a different challenge.  Well, only time will tell who’ll showcase blitzes in IPL 2020 and who’ll fail. However, MS Dhoni, Rohit Sharma, Hardik Pandya and many other Indian cricket stars are definitely not that great when it comes to street cricket aka gully cricket. Dream 11, who are the title sponsors of IPL 2020, recently released an ad campaign where these Indian cricketers play in the street. Dream11 Releases New TVC Ahead of IPL 2020.

However, understanding the gully cricket rules didn’t prove to be a cakewalk for them. CSK captain MS Dhoni, who’s known for his big-hitting abilities, gets out after smashing a scooter while Mumbai Indians pacer Jasprit Bumrah was suspended between his over for bowling too fast. MI skipper couldn’t open as the bats didn’t belong to him and Delhi Capitals star Shikhar Dhawan left perplexed by the one-tip-one-hand rule. Dream11 released many such hilarious commercials which have left the fans in splits. Have a look. Mumbai Indians Duo Rohit Sharma, Jasprit Bumrah Get Involve in Hilarious Twitter Banter.

No Money! No Cricket For Hardik Pandya!!

Jasprit Bumrah Needs To Work On His Bowling!!

Defending champions Mumbai Indians will take on Chennai Super Kings in the season opener on September 19 at the Dubai International stadium. Both the sides will want to register an emphatic victory in the first game to get momentum early in the tournament.

Notably, all the matches will begin 30 minutes earlier than usual timimg. Hence, the evening matches will get underway at 7:30 pm while the afternoon games will start at 3:30 pm.

(The above story first appeared on LatestLY on Sep 18, 2020 11:46 AM IST. For more news and updates on politics, world, sports, entertainment and lifestyle, log on to our website latestly.com).