India will seek redemption for a disappointing defeat in the first match when they play hosts Australia in the 2nd ODI on Sunday. India were comprehensively beaten by 66 runs with the visitors poor with the bat, ball and also in the field. Hardik Pandya's highest individual ODI score and Shikhar Dhawan's half-centuries were the only positives. 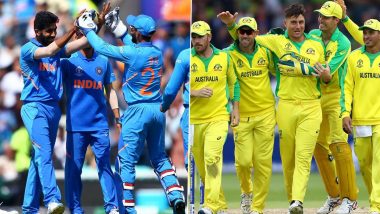 India will aim to bounce back from a disappointing 66-run defeat to Australia in the first ODI when they play the hosts in the second game of a three-match ODI series on November 29, 2020 (Sunday). India are already 0-1 behind in the series and must win to keep their hopes alive of beating Australia in successive ODI series on their own ground. A win in the second ODI match will seal the series for Australia. Meanwhile, fans searching for how and where to watch the live telecast and live streaming online details for India vs Australia (IND vs AUS) 2nd ODI should scroll down for all details. IND vs AUS 2nd ODI 2020 Dream11 Team: Ravindra Jadeja, Steve Smith and Other Key Players You Must Pick in Your Fantasy Playing XI.

Australia beat India by 66 runs in the first match to take a 1-0 lead in the ODI series. Captain Aaron Finch and Steve Smith scored centuries in the match while opener David Warner scored a fine 69 and was involved in in a 156-run opening partnership with Finch. Glenn Maxwell then gave the home side a late flourish with a 19-ball 45 runs. Josh Hazlewood and Adam Zampa were the picks among the bowlers with the former taking three wickets and Zampa four to kill India’s hopes. Hardik Pandya’s 90 and Shikhar Dhawan’s half-century were the only good stories for India in the disappointing match. IND vs AUS 2nd ODI 2020 Dream11 Team Selection: Recommended Players As Captain and Vice-Captain, Probable Lineup to Pick Your Fantasy XI.

On Which TV Channel India vs Australia 2nd ODI 2020 Live Telecast is Available?

India vs Australia 2nd ODI match will be available for live telecast on Sony Sports channels.

Those unable to follow the game live on television can also watch India vs Australia 2nd ODI match online. SonyLiv, the OTT of Sony Network will be live streaming the IND vs AUS 2nd ODI 2020 match online. Apart from that JIO and Airtel subscribers can also catch live action on JIO TV and Airtel Xstream apps.

(The above story first appeared on LatestLY on Nov 28, 2020 10:09 PM IST. For more news and updates on politics, world, sports, entertainment and lifestyle, log on to our website latestly.com).