India's worry has been their bowling as it has failed to stop Australia from getting to record totals. The Aussies made 374 in the first ODI and 389 in the second to take the game out of India's reach. These are the highest totals the Aussies have scored against India in 50-over games. 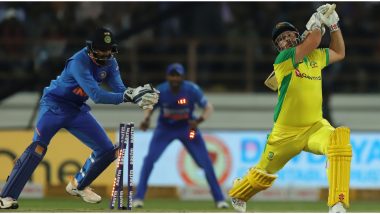 New Delhi, December 1: Indian bowlers will have pride to play for and also gain some confidence ahead of the T20 and Test series when they take on Australia in the third and final ODI at the Manuka Oval in Canberra on Wednesday. If Australia, who are leading the three-match series 2-0, win the final match, it will be the first time they will sweep an ODI series against India at home in 20 years, though not necessarily in a bilateral series. The last occasion when India suffered a whitewash was in 1999-2000 when they lost all their four games in the triangular series that also featured Pakistan.

India's worry has been their bowling as it has failed to stop Australia from getting to record totals. The Aussies made 374 in the first ODI and 389 in the second to take the game out of India's reach. These are the highest totals the Aussies have scored against India in 50-over games. IND vs AUS 3rd ODI 2020 Dream11 Team Selection: Recommended Players As Captain and Vice-Captain, Probable Lineup to Pick Your Fantasy XI.

While there is very little time for the bowlers to rebound as the surface at Manuka Oval is likely to be batting friendly again, the visitors may ring in a change, bringing in Chiman bowler Kuldeep Yadav for leg-spinner Yuzvendra Chahal who has conceded 160 runs in 20 overs during the two games and picked just one wicket.

Kuldeep hasn't played much cricket in recent times but his angle as Chinaman, with the ball turning into a right-hander, could be handy. He played just five games in IPL while his last ODI was 10 months back, on February 5.

Indian middle-order batsman Shreyas Iyer on Tuesday admitted that the bowling has not been up to the mark but promised that the team would play positively in the final match.

"...despite the two losses we are going to play positively. We have played really good cricket in terms of batting. Obviously, the bowling wasn't up to the mark but I am sure the bowlers are really positive...good to see a few of the bowlers going out there and practicing with certain plans. We are very determined to go out there and win the next game and see to it that we don't suffer a clean sweep," Iyer told reporters on Tuesday.

The Indians had an optional practice on Tuesday and a few of the bowlers and batsmen went out to iron out the chinks.

For Australia, the biggest question would be who will open in place of David Warner who will miss not just the final ODI but also the T20 International series that follows. Skipper Aaron Finch said that they have plenty of options although they haven't finalised the replacement yet.

"We haven't picked a team yet. We have a few options, though. Whether we go with (Matthew) Wade or Marnus (Labuschagne) comes up to open the batting. Alex Carey has done a lot of it in the past. I can see there being a number of roles for each one of those guys. We'll wait and see. We haven't seen the wicket yet. Once we see the wicket we'll have a clearer idea on how that's going to look," the 34-year-old said.

(The above story first appeared on LatestLY on Dec 01, 2020 10:34 PM IST. For more news and updates on politics, world, sports, entertainment and lifestyle, log on to our website latestly.com).