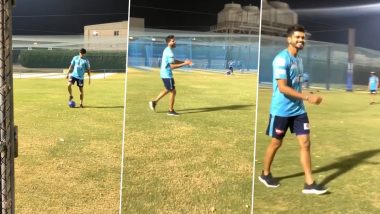 With the 13th edition of Indian Premier League (IPL 2020) less than two weeks away, players of all the teams are leaving no stones unturned in their training session, and Shreyas Iyer is no exception. The Delhi Capitals skipper has been hitting the training ground hard lately and is looking determined to guide his team to their maiden title. Along with polishing his batting prowess, however, the youngster has also been showcasing his football skills. Taking to his official Instagram page, Iyer shared a video in which he was seen closing the lid of the drinks box by smashing the football onto it. Delhi Capitals Coach Ricky Ponting Has Always Given Me Freedom As Skipper, Says Shreyas Iyer.

“Load it up, aim, shoot it up,” wrote Iyer while sharing the video on the picture-sharing website. The caption clearly depicts that the 25-year-old is in a great frame of mind and one can expect him to fire in the forthcoming tournament. In fact, fans were also impressed by Iyer’s latest antics as they flooded the comment section with praises. Have a look. DC Team Profile for IPL 2020: Delhi Capitals Squad in UAE, Stats & Records and Full List of Players.

In the past year, Iyer enjoyed a sensational run in white-ball cricket and emerged a vital cog of India’s limited-overs side. However, he is still yet to win an IPL title and will like to end the drought in UAE.

Alongside him, the likes of Rishabh Pant, Shikhar Dhawan and Shimron Hetmyer will handle the mantle in the batting department. At the same time, Kagiso Rabada, Ravichandran Ashwin and Ishant Sharma will have the onus to shine with the ball. Well, DC certainly have a well-balanced squad on the paper. However, the team has to adapt to the new conditions of UAE to leave a mark.

(The above story first appeared on LatestLY on Sep 09, 2020 05:49 PM IST. For more news and updates on politics, world, sports, entertainment and lifestyle, log on to our website latestly.com).