IPL 2022: RCB Skipper Faf Du Plessis Thinks, Sense of Calmness Is a Must in a 'Pressure-Cooker Environment'

South African batting stalwart and Royal Challengers Bangalore skipper Faf du Plessis has said that the hallmark of his captaincy is to bring a sense of calmness to the dressing room in a charged IPL environment. 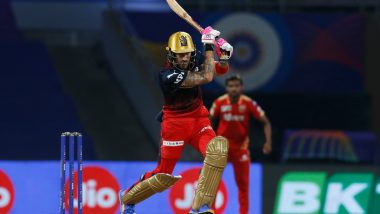 Kolkata, May 24 : South African batting stalwart and Royal Challengers Bangalore skipper Faf du Plessis has said that the hallmark of his captaincy is to bring a sense of calmness to the dressing room in a charged IPL environment. With high-pressure situations being the norm in the lucrative league, du Plessis, who has played a vital role in the side making the grade in IPL 2022, added that maintaining sanity in the dressing room is something which isn't easy. And with him not reacting to situations, he ensures players are in the right environment and right mental frame to perform their task. AB De Villiers Confirms IPL Return With RCB in 2023.

"I try to bring a sense of calmness to the dressing room. Always that calmness and composure. You never show your emotions to people when they make a mistake. We all have emotions but as players it's important to feel that when they make a mistake there isn't someone who is emotionally reacting to that mistake but they can come back with a clear and calm approach to what we're trying to do. That helps the environment a lot. Whether you're winning or losing, it's that consistency," said du Plessis to Cricbuzz. He also said that as a captain he has to be firm at times.

"Positive emotions can be good, but players need their captain to be firm at times," du Plessis said on his captaincy. RCB will take on Lucknow Super Giants in the Eliminator at Kolkata's Eden Gardens on Wednesday. This will be the third consecutive time the Bengaluru franchise are in the IPL playoffs. Elaborating on his leadership, du Plessis said that being firm doesn't mean one has to be harsh. Virender Sehwag Reveals How Anil Kumble Revived His Career and Saved Harbhajan Singh’s Too.

"It's never about being harsh. I also try to involve other players in the leadership duties. Virat (Kohli) has captained, but so has Dinesh (Karthik) and Glenn (Maxwell). They're responsible on and off the field. It can be little things or big decisions regarding our strategy. It's important to empower the senior group," he added. Du Plessis added that coming from a country where players from diverse backgrounds come and become part of the domestic and national teams, it has been easy for him to work with a motley group of players from across the world in the IPL.

"I think I learned a hell of a lot in that job (with the South Africa national team). So it's been a nice life lesson for me as well -- captaining sides. To make me understand people better. I'm very lucky that my journey has taken me through this, almost this life lesson in how different and how unique we all are in our separate ways," he said.

(The above story first appeared on LatestLY on May 24, 2022 04:39 PM IST. For more news and updates on politics, world, sports, entertainment and lifestyle, log on to our website latestly.com).