Irfan Pathan Shares Adorable Picture With Son Imran, Netizens Ask if He Is Another Bowler in Making (See Post) 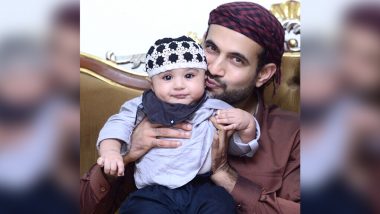 Irfan Pathan shared a lovely throwback picture with his son to wish everyone a ‘blessed Friday.’ The former Indian cricketer took to social media to share the pic and wish his fans a happy Friday. Pathan posted a picture with his four-year-old son Imran Khan Pathan and fans immediately took to social media to comment on the adorable picture. Many praised the baby boy and also enquired if he will go on to become a cricketer like his father. I Haven't Confirmed My Availability in Any Leagues, Says Irfan Pathan.

Pathan captioned the picture “Have a blessed Friday everyone. #love #Throwback.” In the picture, Pathan can be seen sitting on a couch with young Imran on his lap. Hardik Pandya is India’s Ben Stokes? Irfan Pathan Has His Say.

Have a blessed Friday everyone. @imrankpathan_official #jummahmubarak #friday #love #throwback

Another Bowler in Making...

Irfan sir is he also play cricket like u.

What's ur opinion about him

Does He Also Swing the Ball

Look at his eyes, Masha'Allah. Does he also swing as much as you did, @IrfanPathan? Or does he hit them out of the park more?

So cute baby 😘 God bless him

Another Legendary Bowling in Making

Another pathan .. another legendary bowler in making..

cutie seems to be more camera conscious than you...picturesque

Irfan Pathan retired from all forms of cricket earlier this January. He represented India 120 ODIs, 29 Tests and 24 T20I matches. Pathan was part of the victorious 2007 World T20 squad and also took a hat-trick against Pakistan in 2006 becoming the first bowler to take a Test hat-trick in the opening over of a match

(The above story first appeared on LatestLY on Aug 07, 2020 05:15 PM IST. For more news and updates on politics, world, sports, entertainment and lifestyle, log on to our website latestly.com).