After being named as India's skipper for the rescheduled fifth Test against England in Edgbaston, the pacer Jasprit Bumrah on Friday received "tips and tricks" on captaincy from his 'very excited' mother. 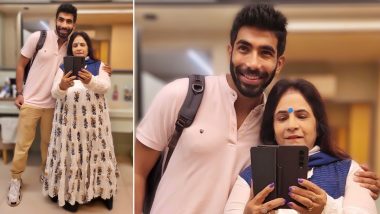 New Delhi, June 30: After being named as India's skipper for the rescheduled fifth Test against England in Edgbaston, the pacer Jasprit Bumrah on Friday received "tips and tricks" on captaincy from his 'very excited' mother. Sanjana Ganesan, the ICC Review presenter and Bumrah's wife, revealed that the pacer was excited and proud after being named captain, but not to the same degree as his mother Daljit. "She's very excited. She's always liked to see him do well because he loves the sport and she's literally seen the entire journey he's gone through to get to where he is. She was ecstatic when she found out," the ICC quoted Sanjana as saying. Jasprit Bumrah Becomes First Fast Bowler Since Kapil Dev to Captain India in Tests.

"She had tons of tips and tricks, even though she's never played cricket herself! Like a mother does, she told him, 'This should be how you think, and this should be what you do'. It was very nice to see, and she was very happy and proud of him," she added. The 28-year-old pacer was named captain after Rohit Sharma tested positive for Covid-19 last week during the warm-up game against Leicestershire. The confirmation of Bumrah's name took a long time. "He hasn't had it all in one impact, because it (the confirmation of the news) has been a pretty trickle. In the sense that we had to wait for a result from Rohit to find out whether or not Jasprit will be leading the side," said Sanjana.

"So it was a lot of wait-and-watch, because there were (Covid-19) tests in the morning and evening, and they wanted to be entirely sure they were doing everything they could to give Rohit a fair chance to come back and play this Test. [Bumrah] got a lot of time to absorb and understand that this was really happening. He's proud and definitely very happy about it. I don't know if there is a little bit of nerves, but he's had enough time to absorb it all," she added. Mahela Jayawardena, the ICC Hall of Famer and Bumrah's coach at IPL side Mumbai Indians, said the pacer was always hugely passionate about Test cricket. Rohit Sharma Ruled Out Of 5th Test Against England, Jasprit Bumrah To Captain India.

"It's just the passion that he has to wear whites. We've had this conversation many years ago, and when he started playing Test cricket for India. And then, the more time that we spent in the Mumbai camp, it seems that Bumrah wants to talk about red-ball cricket. He loves it," Jayawardena said. "It is amazing that you come across fast bowlers who enjoy being out there playing Test cricket, it's refreshing. He looks forward to each and every Test series. He doesn't want to miss a single Test for India he prioritises his Test cricket very much," he added. India will take on England in the fifth and final Test in Birmingham on Friday and the visitors need a win or a draw to secure their first series victory in England since 2007.

(The above story first appeared on LatestLY on Jul 01, 2022 10:20 AM IST. For more news and updates on politics, world, sports, entertainment and lifestyle, log on to our website latestly.com).