Kapil Dev Backs Virat Kohli To Regain Old Form, Says, ‘He Will Not Only Score a Century or Double Ton, but 300’

Virat Kohli hasn't had a great time with the bat in international cricket and is yet to score a hundred in two years, since his century against Bangladesh in the pink ball Test match in Kolkata. Amidst questions of captaincy impacting his batting, Kapil Dev came out in support of the Indian captain. 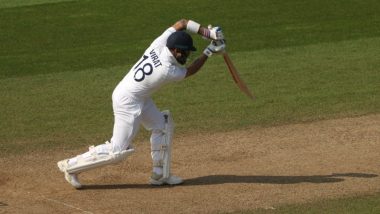 Virat Kohli's batting form has been a topic of a lot of debates and discussion all over in world cricket for quite some time now. The Indian skipper hasn't scored an international hundred since 2019 and that has sparked questions on whether captaincy is having an effect on his batting form overall. Not that he hasn't scored runs. Kohli looked out of touch initially during the Test series between India and England but he bounced back, scoring two fifties. Brushing aside all doubts on the impact of Kohli's captaincy on his form, former Indian captain Kapil Dev has come to the aid of the star batsman. While addressing this issue, he argued that if the burden of captaincy impacted Kohli's batting, then he wouldn't have been able to score so many runs as skipper of the Indian team till now. Latest ICC T20I Batsmen Rankings: Virat Kohli Gains One Spot To Move to Fourth Position

"For all these years, when he was scoring runs, no one said anything about captaincy affecting Virat's batting and now suddenly, there are opinions when there's been a little up and down in his graph. When he scored those double centuries and so many hundreds, wasn't there pressure then? It means that his captaincy should not be the focus. Instead, look at his ability," he said, while speaking on a show,

Kohli took over Test captaincy from MS Dhoni towards the end of 2016 and has led India to 65 Tests so far, where he has struck 20 hundreds and scored more than 5,500 runs. In limited-overs cricket too, the stylish right-hander has attained a very good amount of success with 21 centuries. However, many including fans have questioned Kohli's form as the right-hander, who once regularly broke records and scored hundreds almost at will, hasn't reached the three-figure mark in two years now. Rohit Sharma to Replace Virat Kohli for Limited-Overs Captain After T20 World Cup 2021? BCCI Treasurer Arun Dhumal Rubbishes Reports of Indian Captain

Dev further talked about Kohli's century drought, suggesting that once the latter is back in form, he could even end up scoring a triple hundred. For the record, the Indian captain's best Test score is 254. He said, "The graph has surely gone up and down but for how long? Age 28 to 32 is the time when you really blossom. He is now experienced and mature. If he returns to his old form, Virat will not only score a century or double ton; he will give you 300. He is so much mature now and there is no shortage of fitness when it comes to Kohli. He just needs to identify himself and look to score big."

Kohli would next be seen in action during the UAE leg of the Indian Premier League, which kicks off on September 19. After that, he would lead the national side for the T20 World Cup, starting on October 17.

(The above story first appeared on LatestLY on Sep 16, 2021 05:55 PM IST. For more news and updates on politics, world, sports, entertainment and lifestyle, log on to our website latestly.com).