Young Prithvi Shah's last four outings include two ducks while captain Shreyas Iyer has struggled to regain his form with the bat he showed in much of the first half of the league stage since sustaining a side-strain. 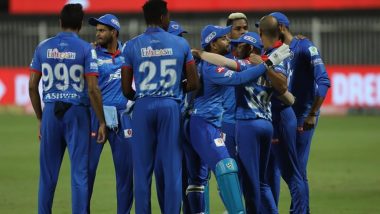 Abu Dhabi, October 23: Table-toppers Delhi Capitals (DC) will aim to return on the winning path when they face fourth-placed Kolkata Knight Riders (KKR) in the 42nd match of the ongoing Indian Premier League (IPL) at the Sheikh Zayed Stadium here on Saturday.

After a five-wicket defeat against King XI Punjab (KXIP) in their last match, Delhi will expect their batters to raise the bar as barring Shikhar Dhawan, all others have faltered.

It was Dhawan's second consecutive ton which had single-handedly propelled DC to a fighting total against KXIP before their bowlers failed to defend the target. KKR vs DC Preview: 7 Things You Need to Know About Dream11 IPL 2020 Match 42.

Young Prithvi Shah's last four outings include two ducks while captain Shreyas Iyer has struggled to regain his form with the bat he showed in much of the first half of the league stage since sustaining a side-strain.

Rishabh Pant had made a comeback from injury in the previous game but the dashing stumper is yet to regain his momentum with the bat.

In the bowling department, in-form pacer Kagiso Rabada will once again try to put the KKR batsmen in trouble along with his South African compatriot Anrich Nortze, who missed the last match against KXIP but is likely to make a return against KKR.

Axar Patel and ace spinner Ravichandran Ashwin will once again look to use the conditions effectively to get the breakthroughs in the middle overs.

On the other hand, despite sitting at the fourth spot, KKR's advancement to the playoffs is uncertain and the Eoin Morgan-led side now needs to forget the heart-breaking loss against Royal Challengers Bangalore (RCB) on Wednesday.

KKR had an embarrassing outing against RCB, being restricted to a paltry 84 despite batting for 20 overs. While Shubman Gill and Rahul Tripathi will have to provide an ideal start, Nitish Rana, Dinesh Karthik and Morgan need to convert the starts they have got in recent games.

Andre Russell missed the last game due to an injury and the team would be hoping the explosive Caribbean all-rounder gets back into the scheme of things soon. Along with his batting fireworks, Russell is capable of getting wickets at crucial junctures.

Meanwhile, Kuldeep Yadav and Varun Chakravarthy will look after the spin attack on a track that has assisted the spinners in the recent past.

(The above story first appeared on LatestLY on Oct 23, 2020 09:01 PM IST. For more news and updates on politics, world, sports, entertainment and lifestyle, log on to our website latestly.com).