KKR vs KXIP IPL 2020 Dream11 Team: KL Rahul, Sunil Narine and Other Key Players You Must Pick in Your Fantasy Playing XI 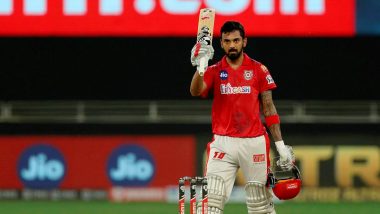 Kolkata Knight Riders (KKR) will take on Kings XI Punjab (KXIP) in match 46 of the Indian Premier League 2020. KKR vs KXIP clash will be played at the Sharjah International Cricket Stadium in Sharjah on October` 26, 2020 (Monday). Both teams are in search of the final playoff spot and a win in this fixture could play a crucial role. Ahead of the KKR vs KXIP clash in Dream11 IPL 2020, here are key players you must have in your Fantasy team. KKR vs KXIP Dream11 Team Prediction IPL 2020: Tips to Pick Best Fantasy Playing XI for Kolkata Knight Riders vs Kings XI Punjab.

Kolkata Knight Riders currently occupy the final playoff spot with 12 points but Kings XI Punjab are just behind them on fifth with 10 points. Dream11 fantasy players will be eager to pick the right key players for the Kolkata Knight Riders vs Kings XI Punjab match in IPL 2020. Dream11 fantasy gaming platform is quite popular among cricket fans who select their teams to win some cash. Team selection with best picks is always a winning formula in Dream11. IPL 2020 Points Table Updated.

The West Indian missed few games due to a controversy about his bowling action but returned in style with a brilliant half-century against Delhi Capitals. Sunil Narine looks to have found his groove with the bat and will also trouble the KXIP batsmen in the game, so he should be included in your KKR vs KXIP Dream11 Fantasy Team.

The Kings XI Punjab skipper is the highest run-scorer in IPL 2020 and should be a must-have in your KKR vs KXIP Dream11 Fantasy Team. KL Rahul has been brilliant this season, scoring runs for fun and with him keeping wickets as well, he could give you extra points from the game.

The Englishman has been inconsistent this season but in the game against Sunrisers Hyderabad showed all of his quality. Chris Jordan took three wickets in the game at an economy of over four and with his power-hitting ability down the order, makes him a must pick in your KKR vs KXIP Dream11 Fantasy Team.

The costliest foreign player in IPL history finally ended his run without a wicket against SRH, last time around. Pat Cummins has been bowling at a very economical rate and has also contributed well with the bat, scoring runs in quick time. So he should be included in your KKR vs KXIP Dream11 Fantasy Team.

The young Indian bowler has been a revelation this season and his low price will make him a great addition to your KKR vs KXIP Dream11 Fantasy Team. Arshdeep Singh has been among the wickets both in the powerplay as well as the death overs and has also bowled economically this season.

(The above story first appeared on LatestLY on Oct 25, 2020 06:38 PM IST. For more news and updates on politics, world, sports, entertainment and lifestyle, log on to our website latestly.com).