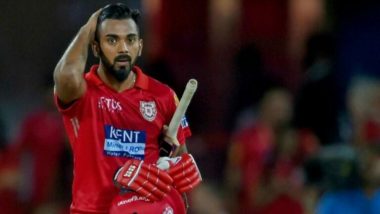 KL Rahul’s Kings XI Punjab played against Delhi Capitals in IPL 2020 at the Dubai International Stadium. During the match, KXIP captain was setting the field while handling his wicket-keeping duties was caught hurling abuse in Kannada.  We do not know who was KL A netizen who understood the abuse shared the video of the same on social media.  KXIP had won the toss and elected to bowl first. The Delhi Capitals team had a shaky start in the start as they lost early wickets in the form of Prithvi Shaw, Shikhar Dhawan and Shimron Hetmyer. Thus to capitalise on the start, KL was setting the field. Umpiring Howler Strikes IPL 2020! Chris Jordan Wrongly Given 'Short Run' During DC vs KXIP Match, Virender Sehwag, Preity Zinta & Others Fume Over Poor Decision (Watch Video).

Kings XI Punjab has a new captain for this season. Last season they had Ravichandran Ashwin as the skipper of the team who is now playing for Delhi Capitals'. The matches are conducted behind the closed doors owing to the protocol laid due to COVID-19 and thus there is no noise of the crowd which. This is how the voices of the players get caught easily in the mics. Now, let's have a look at the video shared by a fan on social media.

Talking about the game, the match was under the scanner for giving the short run to Chris Jordan whereas he was not short of the crease. The match went on to a tie and the Super Overs. Delhi Capitals won the game in Super Overs.

(The above story first appeared on LatestLY on Sep 21, 2020 12:25 PM IST. For more news and updates on politics, world, sports, entertainment and lifestyle, log on to our website latestly.com).