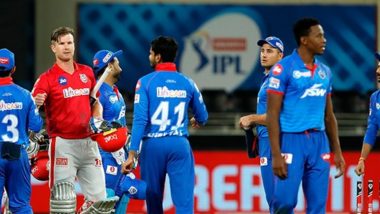 Following the win, KL Rahul was all praises for his teammates. “Specially when you play with six batters and one all-rounder. One of the top four had to do the job. One thing that we need to look at. Shami was coming in after some confidence from the last game. Arshdeep bowled two overs in the powerplay and one over at the death. And he nailed six yorkers,” Rahul said.

“Glenn has been batting well in the nets. He is a great team man and we know the balance he brings to the table. The talk before the last couple of games was to beat two teams were at the top of the points table. I couldn't sleep after the last game. We could have finished it before and not allowed it to go into the super over. The game reminds us to stay humble. We would want to take the momentum forward and take it one game at a time,” he added.

# This was Dhawan’s second century of this season

# Chris Gayle has scored 25 or more runs in an over in IPL seven times.

# This was KXIP’s 15th win over Delhi Capitals out of 26 matches.

Meanwhile, following the victory, Kings XI Punjab now move to fifth spot on the IPL 2020 points table and keep their chances f making it to playoffs alive while Delhi Capitals stay on top.

(The above story first appeared on LatestLY on Oct 21, 2020 12:13 AM IST. For more news and updates on politics, world, sports, entertainment and lifestyle, log on to our website latestly.com).