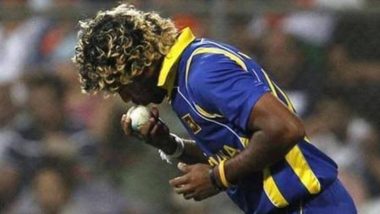 New Delhi, June 23: Batting great Sachin Tendulkar said that Sri Lankan fast bowler Lasith Malinga may have to bring a slight change in his bowling action due to the International Cricket Council's (ICC) rules for the resumption of cricket amid the coronavirus pandemic.

Malinga is widely rated as one of the greatest fast bowlers of all time in limited-overs cricket. The Sri Lankan pacer also has one of the most distinctive bowling actions in the world, particularly the way in which he releases the ball. He is also known to kiss the ball often at the start of his run-up which is what Tendulkar pointed out. After Yuvraj Singh, Harbhajan Singh Shares Gender-Swap Pictures of Sachin Tendulkar, Sourav Ganguly and Other Former Indian Cricketers (View Post).

"A certain someone will have to also change his run up routine with the new @icc rules! What say Mali? #LasithMalinga," Tendulkar tweeted on Tuesday alongwith a pic of Malinga kissing the ball at the start of his run up.

A certain someone will have to also change his run up routine with the new @icc rules! What say Mali?😋#LasithMalinga pic.twitter.com/rHqbXZ3LMj

Among the slew of rules approved by the ICC is that saliva cannot be used to shine the ball as it is known to carry the virus. Players are also not allowed to use any artificial substance as a substitute but can use their sweat to do the job.

How effective this will be in place of saliva will be seen when West Indies take on England in a three Test series starting on July 8.

(The above story first appeared on LatestLY on Jun 23, 2020 10:30 PM IST. For more news and updates on politics, world, sports, entertainment and lifestyle, log on to our website latestly.com).