Lucknow Super Giants takes on Mumbai Indians in the IPL 2022 match 37 at the Wankhede Stadium. For LSG vs MI live streaming online and TV telecast details you can scroll down. 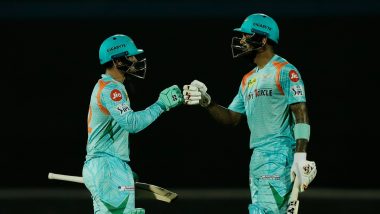 Mumbai Indians are having one of the worst seasons ever witnessed by a franchisee in the history of the Indian Premier League, with the team yet to record a win. They are almost out of the race for play-offs, but the situation is such that their pride has taken a hit. Having lost some of the core members in the auction, their replacement strategy has clearly not worked and questions are being asked about the team management. Next up they face the Lucknow Super Giants, who have kind of slowed down in the last few matches. The K L Rahul led side will be looking to break into the top four with a win over the faltering Mumbai Indians. LSG vs MI IPL 2022 Dream11 Team: Tilak Varma, Marcus Stoinis and Other Key Players You Must Pick in Your Fantasy Playing XI.

Tilak Verma and Surya Kumar Yadav have been getting the runs for the Mumbai Indians, but Rohit Sharma and Ishan Kishan have not provided the starts needed in the powerplays. This has put the middle-order under undue pressure and has kept the team devoid of big scores. Jaydev Unadkat was hit around the park by MS Dhoni in the last over which cost the team the game and once again highlighted the importance of not having a premium death over specialist.

Lucknow Super Giants have are a balanced outfit but batting has let them down a bit recently, resulting in two defeats in the last three matches. K L Rahul is immense for them and ideally, the Indian batsman has to bat for long periods for them. Jason Holder and Krunal Pandya have the knack of picking key wickets and will fancy bowling at Mumbai. LSG vs MI, Dream11 Team Prediction IPL 2022: Tips To Pick Best Fantasy Playing XI for Lucknow Super Giants vs Mumbai Indians Indian Premier League Season 15 Match 37.

Those unable to watch the LSG vs MI match live on television can follow the game online. Disney+ Hotstar will be live streaming the Lucknow Super Giants vs Mumbai Indians match online for its fans in India. Fans, however, need to subscribe to Hotstar by paying a nominal subscription fee. Lucknow Super Giants are the overwhelming favourites for the match and should secure the two points.

(The above story first appeared on LatestLY on Apr 24, 2022 12:32 PM IST. For more news and updates on politics, world, sports, entertainment and lifestyle, log on to our website latestly.com).