MI vs PBKS Preview: Likely Playing XIs, Key Battles, Head to Head and Other Things You Need To Know About VIVO IPL 2021 Match 42

Mumbai Indians would be desperate to return back to winning ways after three straight losses in the UAE leg of IPL 2021 and would want their key players in Kieron Pollard, Hardik Pandya and skipper Rohit Sharma to contribute heavily. Punjab meanwhile, would be confident after a five-run win in their last match. 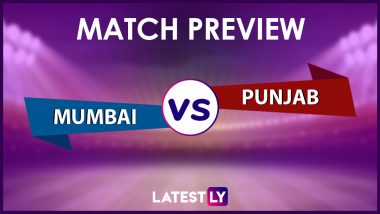 Mumbai Indians would aim to turn the tide and desperately try to save their sinking campaign when they face Punjab Kings in the Sheikh Zayed Cricket Stadium on Tuesday, September 28. The match would begin at 7:30 pm IST (Indian Standard Time). Mumbai Indians have had a horrid run in the UAE leg of IPL 2021 so far. The defending champs lost to Chennai Super Kings, which was followed by a thrashing at the hands of the Kolkata Knight Riders. On Sunday, they were put into further trouble after a humiliating 54-run defeat to Virat Kohli's Royal Challengers Bangalore. Mumbai Indians would take the field on Tuesday to face Punjab Kings now, with an aim to build back and return to winning ways. Rohit Sharma's side had entered the UAE leg of IPL 2021 as one of the favourites to go all the way, but the narrative has changed dramatically. Now, all they need is a win, which would instill that faith and confidence in the players. And they would need their wobbly middle-order to take charge. The likes of Suryakumar Yadav, Ishan Kishan, Kieron Pollard and the Pandya brothers have misfired so far and Mumbai would want them to be at the top of their game on Tuesday. Currently placed seventh, Mumbai need to win all their games in order to make it within the last four. Harshal Patel Becomes Third RCB Player to Scalp a Hat-Trick, Achieves the Feat During RCB vs MI, IPL 2021 (Watch Video)

Punjab Kings meanwhile, started off poorly in the UAE leg with a disappointing two-run loss to Rajasthan but they found a way to win against Sunrisers Hyderabad, despite posting a low total on the board. But there's room for a lot of improvement and despite Mumbai being in poor form, Punjab would not be too eager in underestimating the five-time champions. Mumbai Indians IPL 2021 Playoff Qualification Scenario: Here's How Rohit Sharma's Men Can Qualify for Knockouts

Mumbai have had the advantage over Punjab Kings with respect to head-to-head records. Out a total of 27 matches, Mumbai Indians have won 14 while Punjab have 13 wins to their name. Rohit Sharma's side have won a total of four matches in the last seven matches that they have played against the 2014 finalists.  IPL 2021 Points Table Updated

For Mumbai Indians, captain Rohit Sharma and Jasprit Bumrah would be very important for a win while Punjab would rely on a lot on their skipper KL Rahul and ace paceman Mohammed Shami.

Rohit Sharma vs Mohammed Shami would be a key player battle in this match along with the duel between KL Rahul and Jasprit Bumrah. The winners of these duels would have a say in their team's performance and this could potentially determine the outcome of the match.

Mumbai Indians vs Punjab Kings (MI vs PBKS) match in IPL 2021 will be played at the Sheikh Zayed Cricket Stadium in Abu Dhabi on September 28, 2021 (Tuesday). The game is scheduled to begin at 07:00 pm IST (Indian Standard Time). Toss will be held at 06:30 pm.

(The above story first appeared on LatestLY on Sep 27, 2021 05:43 PM IST. For more news and updates on politics, world, sports, entertainment and lifestyle, log on to our website latestly.com).