Former Australian captain Michael Clarke believes that Australian cricketers get softer than usual when they are playing against India to protect their Indian Premier League (IPL) contracts. In fact, the World Cup-winning skipper even went on to say that the current Australian players are ‘scared’ of sledging Virat Kohli. 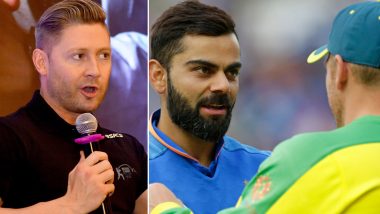 Australian cricket players are known for their robust nature and in order to dominate the opposition on the field, they also tend to distract the players through verbal means of communication. In fact, one can say that Aussie cricketers and sledging go hand in hand as the side has numerous stories of verbally intimidating the opposing players. However, former Australian captain Michael Clarke believes that Australian cricketers get softer than usual when they are playing against India to protect their Indian Premier League (IPL) contracts. In fact, the World Cup-winning skipper even went on to say that the current Australian players are ‘scared’ of sledging Virat Kohli. IPL 2020 to Be Held Between July-September? BCCI Looking at a Possible Window: Report.

"Everybody knows how powerful India are in regards to the financial part of the game, internationally or domestically with the IPL," Clarke was quoted as saying by Big Sports Breakfast. “I feel that Australian cricket, and probably every other team over a little period, went the opposite and actually sucked up to India. They were too scared to sledge Kohli or the other Indian players because they had to play with them in April,” he added.

Pacer Pat Cummins was sold to Kolkata Knight Riders (KKR) for a whopping INR 15.5 crore, becoming the most expensive in the history of the tournament. Glenn Maxwell went to Kings XI Punjab for INR 10.75 crore from while Mumbai Indians picked Nathan Coulter-Nile for INR 8 crore. While Australia’s white-ball captain will join forces with Virat Kohli in the Royal Challengers Banglore squad.

"Name a list of 10 players and they are bidding for these Australian players to get into their IPL team. The players were like: 'I'm not going to sledge Kohli, I want him to pick me for Bangalore so I can make my $1 million US for my six weeks. "I feel like that's where Australia went through that little phase where our cricket became a little bit softer or not as hard as we're accustomed to seeing," said Clarke.

Clarke’s comment, however, could surprise many as Kohli has a history of on-field spats with Australian cricketers. Also, during India’s last Test series down under, Australian skipper Tim Paine was quite vocal behind the stumps and also got involved in an on-field argument with the Indian skipper.

(The above story first appeared on LatestLY on Apr 07, 2020 03:52 PM IST. For more news and updates on politics, world, sports, entertainment and lifestyle, log on to our website latestly.com).