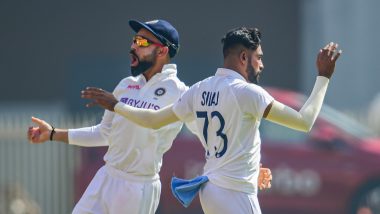 Apart from England’s batting, what grabbed the headlines on day one of the fourth Test between India and England was the confrontation between Virat Kohli and Ben Stokes. The video of the confrontation between the two went viral on social media and the incident also involved Mohammed Siraj. After the match, Siraj was asked about the incident where he revealed that the English all-rounder had abused him after Siraj bowled a bouncer. Thus Siraj complained to Virat Kohli about the incident. "Ben Stokes gave me gali (abused me) so I told Virat bhai about that. Virat bhai handled it thereafter," Siraj said. Virat Kohli Argues With Ben Stokes, Indian Captain Takes Stand for Mohammed Siraj After England All-Rounder’s Heated Conversation With the Pacer (Watch Video).

Day one of the fourth Test matches turned out to be quite an eventful one for the home team. Axar Patel scalped four wickets whereas, Ravichandran Ashwin got three wickets. The English team got bundled out on the score of 205 runs. Ben Stokes scored 55 runs and became the highest contributor to his team. Dan Lawrance made 46 runs. Now, let's have a look at the video where Kohli and Stokes are confronting each other.

Talking about the Indian innings, they already lost their first wicket as Shubman Gill got LBW and got out on 0. It was James Anderson who got the wicket of the Indian opener.

(The above story first appeared on LatestLY on Mar 04, 2021 08:57 PM IST. For more news and updates on politics, world, sports, entertainment and lifestyle, log on to our website latestly.com).