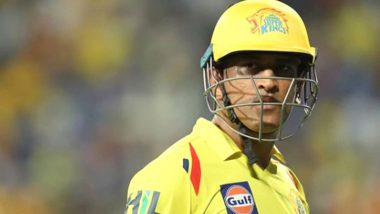 Last night MS Dhoni has made headlines not only for the kind of a result that the team has had but also for gifting away his jersey to Hardik and Krunal Pandya. Prior to this, he also gave away his jersey to Jos Butler after their tie against the Rajasthan Royals in the IPL 2020. The pictures of the MS Dhoni gifting away his jersey have gone viral. The pictures of MS Dhoni gifting the jersey went viral on social media. Now, this has left the netizens wondering if MS Dhoni will be retiring from the IPL too. The netizens posted tweets on social media where they posted tweets about the same. MS Dhoni Gifts His Jersey to Hardik & Krunal Pandya After CSK vs MI Clash in IPL 2020 (View Pic).

Chennai Super Kings have had a forgetful season this year. The team is placed on number eight of the IPL 2020 with six points in their kitty. There have been numerous reports on the Chennai Super Kings management has been unhappy with the senior members in the team. Questions have been raised on MS Dhoni's captaincy as well. The team has so far played 11 games and have won only three of them. Now, let's have a look at the tweets by netizens speculating on MS Dhoni's retirement from IPL.

MS Dhoni retiring for CSK will hurts a lot for me than his intl. retirement.

Plzz plzz tell me anyone Mahi is taking retirement from IPL or not plzzz tell me it's fake news before my heart shattered into pieces plzzz...?

Retirement from IPL too?

#MSDhoni Handing out your jersey to all opposing teams, upcoming retirement MSD?

(The above story first appeared on LatestLY on Oct 24, 2020 12:03 PM IST. For more news and updates on politics, world, sports, entertainment and lifestyle, log on to our website latestly.com).