Netherlands vs New Zealand T20I ODI will be played at the Sportpark Westvliet in Voorburg on August 05, 2022 (Friday). The NED vs NZ cricket match has a scheduled start time of 08:30 pm IST (Indian Standard Time). 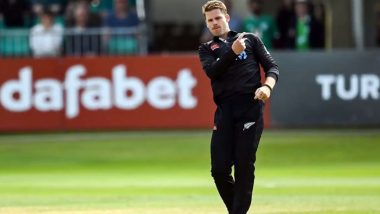 New Zealand struggled to defeat Netherlands in the first game of their two match T20 series which would have given the host a lot of confidence. The two teams clash again in the decider at Hague with the Dutch trying to level the series. The BlackCaps end their long European tour which largely comprised a squad featuring their fringe players with this tie and they will be happy with their bench strength with the T20 World Cup in Australia not far away. Their have been instances where it did look like the visitors will lose the contest but on each occasion someone in the team has risen to the challenge which has been a hallmark of their time here. India vs West Indies 4th T20I 2022 Preview: Likely Playing XIs, Key Battles, Head to Head and Other Things You Need to Know About IND vs WI Cricket Match in Florida.

Martin Guptill, the veteran New Zealand opener, was the only batsmen that looked comfortable out their in the middle in the previous match. The entire Kiwi middle order looked below par and a lot of credit for that will need to go to the Dutch bowlers. James Neesham is a player that brings stability to the team particularly in the shortest format and he will be the player to watch out for once again.

Logan van beek and Shariz Ahmed were pick of the bowlers for Netherlands in the first match and apart from the rest of the unit also remained successful in maintaining the pressure on the Kiwi batters. But their chase did not go as per plan as everyone barring Bas de Leede failed. Vikramjit Singh will be pushing for a place in the playing eleven and his presence adds a more attacking option in the run  scoring department.

When is Netherlands vs New Zealand 2nd T20I 2022? Know Date, Time and Venue

Netherlands vs New Zealand T20I ODI will be played at the Sportpark Westvliet in Voorburg on August 05, 2022 (Friday). The NED vs NZ cricket match has a scheduled start time of 08:30 pm IST (Indian Standard Time).

Where To Watch Live Telecast Of Netherlands vs New Zealand 2nd T20I 2022 on TV?

Since there is no official broadcaster for this game in India, the match would not be available for live telecast. Hence, fans cannot watch live action of the Netherlands vs New Zealand game on their TV sets.

How To Get Free Online Live Streaming Of Netherlands vs New Zealand 2nd T20I 2022?

FanCode will provide the live streaming of the NED vs NZ T20I series 2022 on its online platforms in India. Fans can tune into the FanCode app or website to watch live streaming of Netherlands vs New Zealand 2nd T20I online. South Africa are the overwhelming favourites to win the opening T20 international against Ireland to take an early lead.

New Zealand are on a different level in comparison to the Netherlands and should secure another win.

(The above story first appeared on LatestLY on Aug 05, 2022 07:14 PM IST. For more news and updates on politics, world, sports, entertainment and lifestyle, log on to our website latestly.com).