Pat Cummins, the Australia Test skipper, is reportedly the highest-paid cricketer in his country with a news report saying that the pace spearhead earns a cool AUD two million a year. 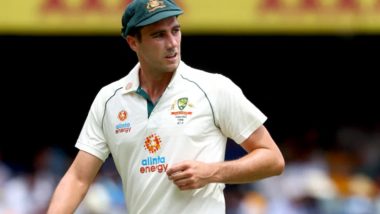 Melbourne, May 25: Pat Cummins, the Australia Test skipper, is reportedly the highest-paid cricketer in his country with a news report saying that the pace spearhead earns a cool AUD two million a year. A report in Sydney Morning Herald and The Age on Wednesday said that the 29-year-old Cummins earned AUD 1.8 million for playing for Australia and received an incentive of AUD 200,000 for leading the side this year. PCB Quashes Rumours About ODI Series With West Indies Getting Postponed.

The report added that the "confidential rankings" were released "internally by Cricket Australia this week" and that Cummins was the leading earner in the sport for the third successive year. Cummins' pace bowling partner Josh Hazlewood is second in the pecking order, followed by opener David Warner, pace bowler Mitchell Starc, batters Steve Smith and Marnus Labuschagne and spinner Nathan Lyon. David Miller Reveals Hardik Pandya’s Advice to Him During GT vs RR, IPL 2022 Qualifier 1 Clash.

"Hazlewood pocketed AUD 1.6m, Warner earned AUD 1.5m, Starc took home AUD 1.4m, Smith was paid AUD 1.3m, Labuschagne earned AUD 1.2m and Lyon was paid AUD $1.1m," the report said. Among the biggest gainers this year is Hazlewood, who has climbed from fifth to second spot this year despite playing just two Tests last season. The pacer was sidelined after the first Ashes Test at home and could not take further part in the series due to a side strain. Batting stalwart Steve Smith has dropped from second to fifth and Labuschagne, the No.1 batter in ICC Test rankings, has achieved his highest ranking of sixth. Australia are scheduled to fly out next week to Sri Lanka for a month-long series, which includes three T20Is, five ODIs and two Tests. Action begins with the opening T20I at the R. Premadasa Stadium in Colombo on June 7.

(The above story first appeared on LatestLY on May 25, 2022 04:26 PM IST. For more news and updates on politics, world, sports, entertainment and lifestyle, log on to our website latestly.com).